One hot Saturday in August we went to the biggest annual event in Columbus, one that I had never been to, the Ohio State Fair. The Ohio State Fair is one of the largest state fairs in the United States. In 2015, attendance was 982,305, the fair’s highest 12-day attendance on record

As usual we arrived early, although at the fair there really is no such thing as early, as people are there all night, and visitors start arriving about 6 AM, so when we got there at 9 it was busy but not insanely crowded, yet.

Shortly after arriving, and taking our queue from our recent visit to the Fairgrounds for the car show, we jumped on the Sky Ride for the scenic route to the south entrance. This, as with the car show, gave us a great overview. Since we went over the midway we had a bird’s eye view of the food vendors getting ready for the day. 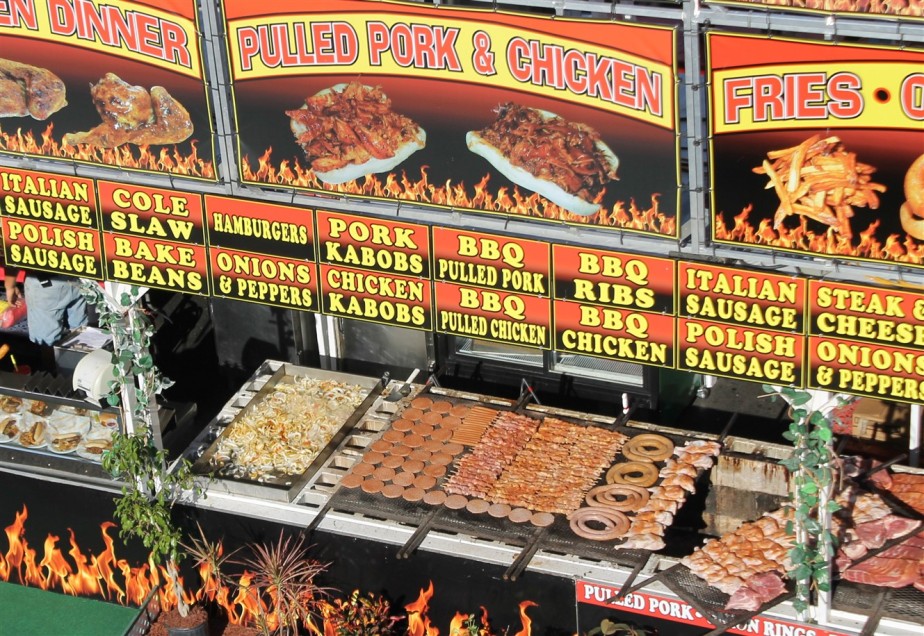 Our first stop was an agricultural building where teens from 4H clubs were showing their prize cows. Next door was the dairy showcase, where they have an ice cream stand and a Midwest state fair specialty, butter sculptures. This year’s theme was the National Champion Ohio State Football team and their coach, Urban Meyer. 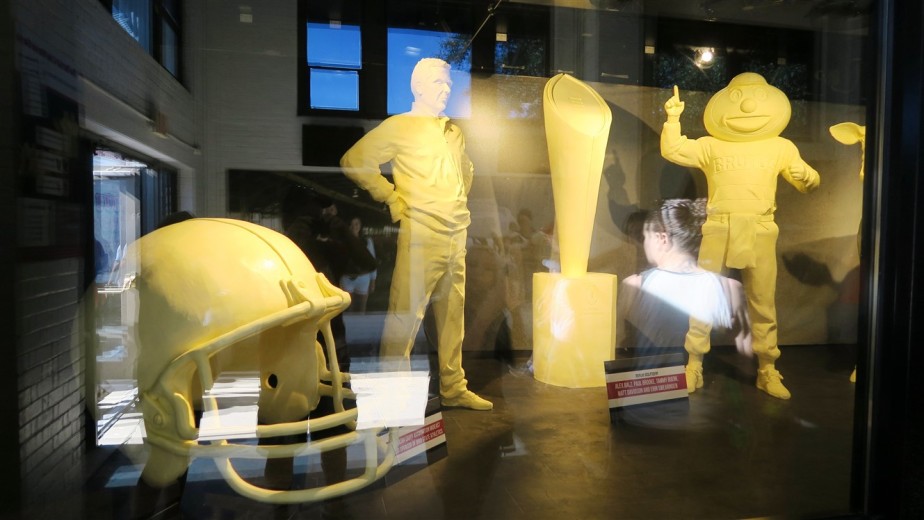 Motivated I had a milk shake from the stand, which was quite good. Out back the kids were getting their cows ready for their moment in the spotlight by washing them off, which was an amusing view with the skyline of Columbus, aka Cowtown, in the background. Next door were the swine, including 3 newborn piglets, and one named Marvelous, who weighed 1100 pounds.

The great thing that I never knew about the fair was the diversity of attractions. After seeing cows and pigs we went to the Janis Center where they had crafts, and a large model train display in the basement. Next door to the Janis Center was the Cox Fine Arts Center. This center featured a gallery quality collection of paintings, sculptures and photography for both amateurs and professionals.

Also on the south end of the fairgrounds is the Ohio Department of Natural Resources area, which includes gardens, shady areas and various outdoor shows. We watched the lumberjack show, followed by a walk through the natural gardens.

Much like the Columbus Arts Festival there was an area raising money for a food bank with art made out of canned food. For the fair that meant a combine and a tractor, impressive indeed.

After wandering the midway checking out all of the unhealthy food options such as Fried Oreo Cookies, Deep Fried Buckeyes, and a stand that would put bacon on anything you could think of, we decided to forego the heart attack for the day and went with a buffet ran by one of the clubs.

Our first event of the afternoon was one of the highlights, pig races. This carny apparently travels the country with his collection of pigs, where they set up a small track, given the cute names and stage races. While hooky it was fun to watch them.

After watching a few rounds of jousting, with actual horses and riders, in the Taft Coliseum and checking out our second dog skills competition, it was time to go as we were worn out from the walking and hot sun.

While I was expecting the ultimate Walmart crowd, in reality the Ohio State Fair had an interesting collection of activities that filled our day.