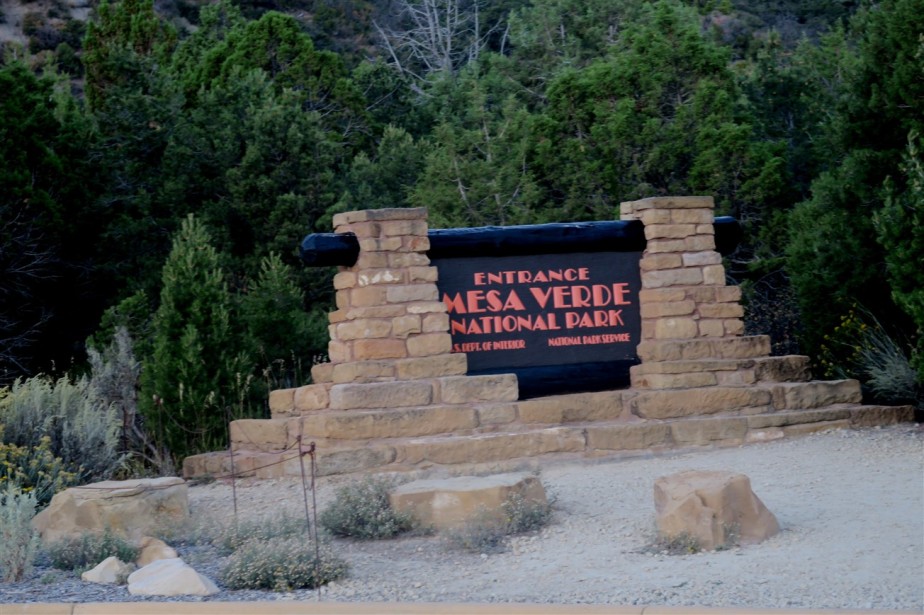 With the brief drive, we ended up arriving before the Visitor Center opened so we drove to Park Point, the highest point at 8,572 ft in the park. From the observation tower you could see for miles to the distant mountains. 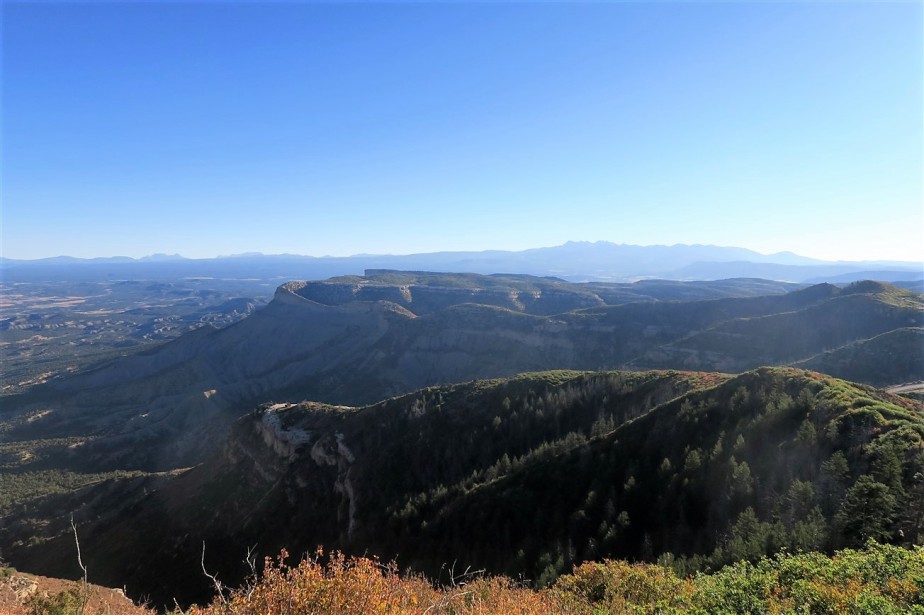 Returning to the visitor center promptly at 9 am we bought tickets at the Visitor’s Center for the 10:30 am ranger tour of the Balcony House, the only tour available that day. It is a 24 mile, 45 minute drive back to the Balcony House so we set out directly for our tour. Since we did arrive with some time to spare we spent a bit of time at the overlooks for the other houses in the cliff faces of the canyons.

Our tour took us into the pueblo cliff dwellings within the canyon. The one-hour Balcony House tour is one of the most intimate yet adventurous tours at Mesa Verde. A visit to Balcony House will challenge your fear of ladders, heights, and small spaces, and will give you the opportunity to explore the common areas of a mid-sized, 40-room dwelling.

The Balcony House tour requires visitors to descend a 100 foot staircase into the canyon; climb a 32 foot ladder; crawl through a 12 foot, 18 inches wide tunnel; and clamber up an additional 60 feet on ladders and stone steps. About 50 people hiked the path, down  and climbed the two-person wooden ladder as part of the journey to get into the dwelling.

As noted we also squeezed through crevices and crawled through tunnels to get to the ruins. We learned that the ancient cliff dwellers lived on top of the mesa for 700 years then moved to the cliffs of the canyon for another 100 years. It is thought that the cliff dwellers lived in these homes nested on the cliffs to give them an advantage from their enemies. No one knows what happened to these people but many artifacts and some graves were found at Cliff Palace. 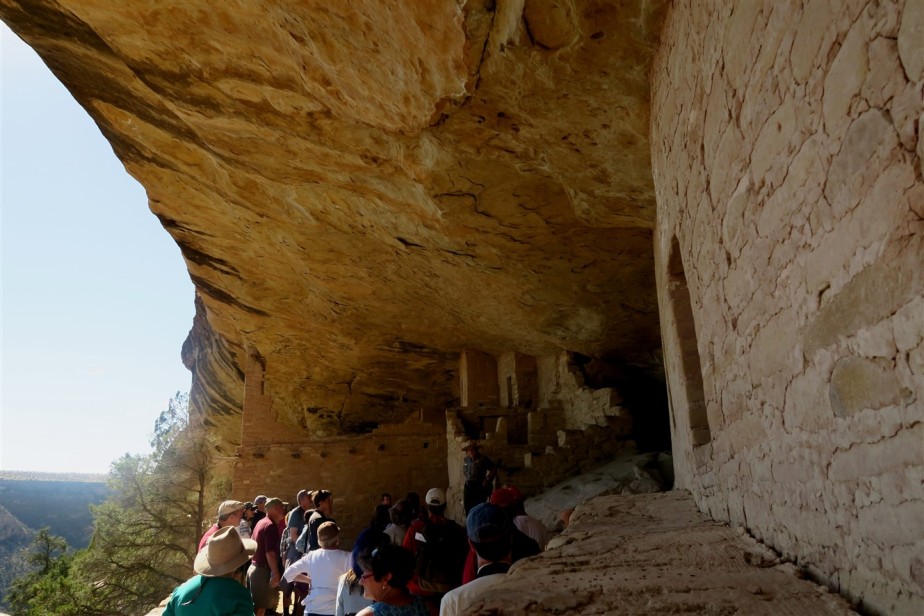 The tour guide led the group to a kiva in excellent condition that was used for socializing for the Puebloans. Some of the dwellings had multiple stories with the wood and stone materials still visibly solid. An archeology group from the 1920’s set steel supports in some of the dwellings to preserve the structures while others buildings were left untouched. We moved along a ledge of the structure and climbed a very steep ladder to stone steps cut into the cliff. A chain railing along the steps helped us pull ourselves up to the next ladder to reach the top of the mesa again. I am not fond of heights but made it through the whole tour. 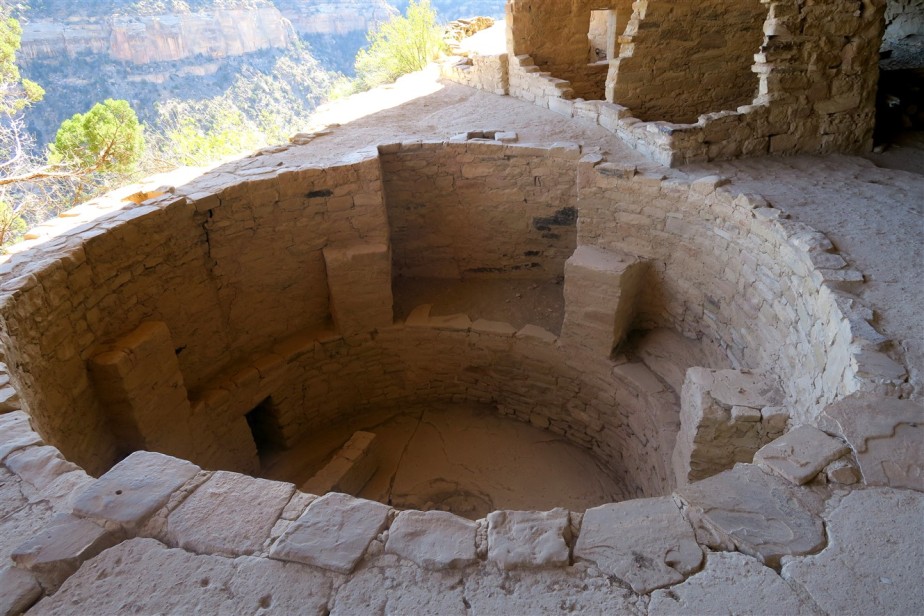 We drove the loop around the mesa to view the Cliff Palace from the overlook at the opposite side of the canyon. We could see the Cliff Palace with more rooms and kivas tucked into caves and hidden along the cliff. This site is very special, it sparks a thought to how these people survived and thrived for so many years by being so resourceful.

Lunch was at the park service’s Far View Cafe, with the company of two bus loads of French tourists. Later we drove to Step House where we walked downhill to see dwellings in a shady canyon. This cliff dwelling had upper and lower rooms and a kiva. Primitive steps made by the Puebloans rose out of the far side of the canyon but were not open to the public for use since these steps were not restored and dangerous.

Our next stop was the Spruce Tree pueblo, with a downhill on a path to ruins of 115 rooms and 8 kivas. There were rooms deeper into the cliff but we did not have access to go deep inside. The ancient Puebloans farmed small patches of corn and squash. We saw three flat stones with hand sized round stones set at the front of the dwelling as the ranger explained that these stones were used to grind grain such as corn. Juniper, a native tree, along with sandstone were used to build the dwellings. It was evident that the dwellings at this site still had original juniper wood and stone held together with their mud mix. The tall two-story construction had small square windows and small square doors. Spruce Tree dwelling also had a lower level where we climbed down a narrow ladder to a round stone room. The opening from above was so small that when a person stood at the opening he blocked all light into the room below. The ceiling was about eight feet high and about 20 people could stand inside. 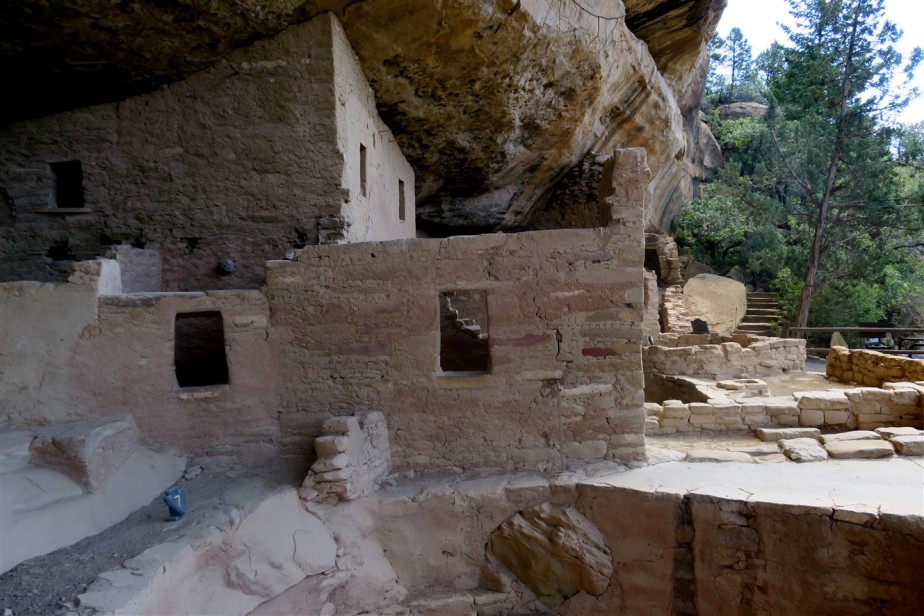 By late afternoon we were ready for 1 more hike, so we went back to a trail near the Balcony House Overlook at Soda Canyon. We walked the trail to the edge of the canyon to see the Balcony House from across the canyon. This view showed exactly how high up on the cliff face the dwelling that we toured was, and from afar we could see the entire dwelling from one viewpoint.

In addition we saw the ladders anchored against the cliff that we scaled down and up again. This view made the tour seem even more spectacular seeing the location of the dwelling and its height on the canyon wall, and made me glad I went on the tour before seeing this view.

We made our way off the mesa down the hill through switchbacks and a tunnel toward Durango, Colorado.

As we neared Durango a rock hit the windshield and put a crack into the lower left side. A truck with a trailer carrying an ATV was ahead of us but we did not see how anything could discharge from the truck on a paved highway. We were only passing through Durango, a ski town, to get to Pagosa Springs, Colorado.

It was about 6 pm when we arrived at the High Country Inn on the outskirts of Pagosa Springs. High Country Inn did not have our reservation so we opted to find lodging in the town of Pagosa Springs closer to restaurants. We had trouble finding a place to stay the night but ended up at the Pagosa Springs Inn. We followed a bus of elderly tourist who were hassling the desk manager about their luggage and wake up calls. Those elderly patrons caused such a fuss that the desk manager threw up his hands to say he had no more rooms to avoid dealing with them anymore. The hotel was also busy due to a Corvette convention held as part of a town festival.

As usual, I found that being polite helps, as I politely asked for a room for us and the manager obliged. Given the entire town was busy, we opted to walk next door to eat dinner at Pizza Hut. 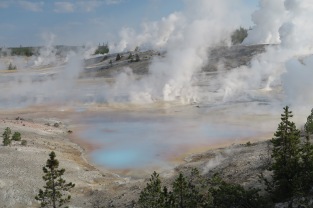