Day 20 started out checking some of the sights of Oklahoma City that we missed yesterday, starting at the Centennial Land Rush Monument commemorating the 1889 Oklahoma Land Rush. It was at the edge of the Unassigned Lands reserved for the Indians where 50,000 people lined up ready to claim land for themselves. The land rush allowed Oklahoma to become a territory and apply for statehood with the instant increase in population. 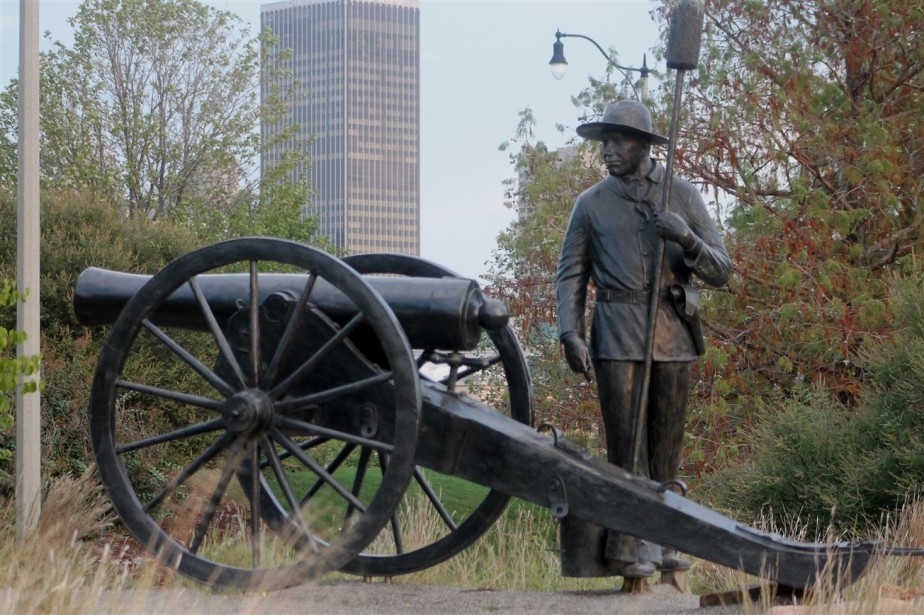 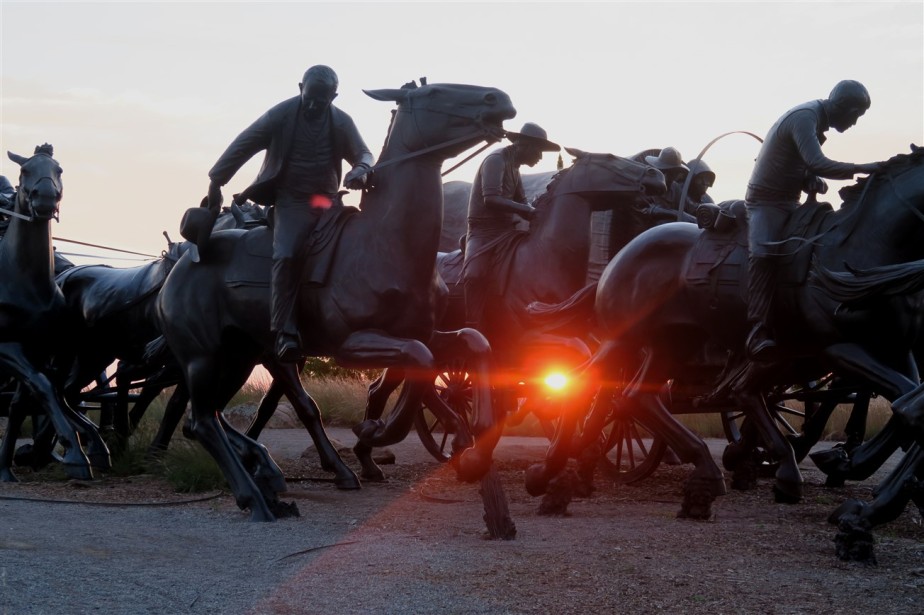 There are 35 statues of men, women, children, and animals racing frozen in motion. It begins with a man firing a cannon to start the rush. There are a few statues of people already across the line, or Sooners as they became known who did not wait for the cannon fire. The Land Rush is one of the largest freestanding bronze sculptures in the world. As we left the park of the Land Rush Monument, we saw a single statue of Chickasaw, a native of the area.

From there we drove to the Oklahoma State Capitol building, which is amazingly fronted by an oil derrick at the center of the entrance complete with the smell of oil.

Just down the street was a collection of Miss America statues at the Oklahoma City University. There to greet you are a trio of bronze statues dedicated to the school’s three Miss America winners, Jane Jayroe, Susan Powell and Shawntel Smith along with a walk of fame. I recognized the star of Kristen Chenowith on the walk of fame. How ironic that our road trip took us to the museum where earlier we saw the bus from the movie RV which she played the role of Mary Jo Gornicke whose family lived on the bus.

South of Oklahoma City is the Museum of Osteology. The museum is the result of Skulls Unlimited, a business that processes the cleaning of skeletons and resells the skeletons or bones to schools, collectors, and labs. The business started when the owner was an seven year old boy and found a dog skull. His family encouraged him to pursue his interest and later in life he opened the museum to display donated and legally purchased bones and skeletons from around the world. A humpback whale skeleton suspends from the ceiling of the two-story museum. A skeleton of a giraffe stands 13 feet tall while skulls of hippos, elephant, reptiles and many mammals and fish are displayed behind lit glass. Facts about the animal such as diet and habitat are posted next to the skeletons. Approximately 600 skeletons were on display. Mounted heads of antelope, deer, and moose lined the walls of the lobby and gift shop. There are also some fossilized pieces from thousands of years ago.

A video showing the steps involved to archive the white clean bones played. Mike Rowe of the television show Dirty Jobs featured an episode when he visited Skulls Unlimited to clean an elephant skull. I was surprised that part of the process was done by the use of domestic beetles to devour the remaining bits of flesh off of the bones after flencing. The bones then take a hydrogen peroxide bath to whiten the bones. Later the bones are put together into an action pose with rods drilled into the bones and putty. The skeletons are then placed in the museum as pieces of art.

Norman, Oklahoma is a city not far from Oklahoma City where the actor, James Garner is honored with a statue, as well as Oklahoma University, with an impressive football stadium

Another stop in Norman, OK was the headquarters of the National Weather Service, part of NOAA, at the campus of the University of Oklahoma. We got there about 11 am to find that tours require scheduling weeks in advance but security allowed us to skim the first floor of the atrium that held posters and monitors with complicated calculations regarding floods in Africa. The NOAA had images of clouds in a database detailing constant radar of weather around the world. Although our visit was limited, the building itself was impressive.

Continuing through southern Oklahoma we found a small church in an old warehouse called the Lexington Worship Center, who has, for unknown reasons, a VW spider, literally a VW Beetle propped up on 6 giant spider legs. This seemed an unusual place for this odd piece of art. The artist must have gotten confused since spiders have eight legs. The hood is painted with two wide white stripes and two eyes where the headlights once were and it stands about 15 feet tall. 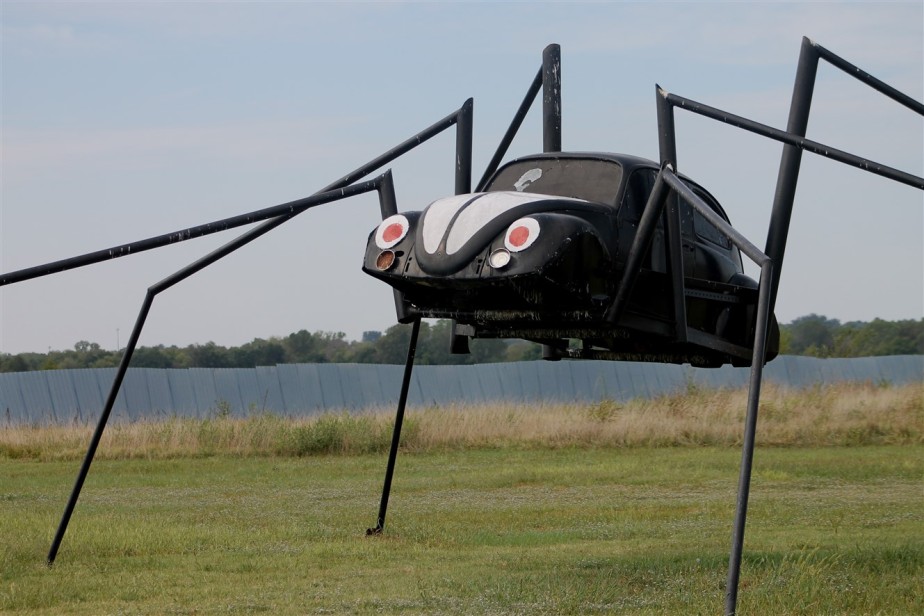 Our next stop was at the Cloverleaf, a store in Ardmore, Oklahoma. The store is painted bright pink with pastel colored accents and lots of painted trash used as art inside and out. The entrance has painted bicycles of pink and green that line a circle driveway. Painted mannequins are positioned on some of the bicycles while dozens of pink flamingoes are planted in the grassy yard. Chinese lions and other lawn art are piled up at the front door. We found a variety of novelties inside the store. As we strolled through the shop, the owner’s pet poodles walked with us hoping for attention. A caged cockatiel in the back of the store squawked at us and said a few words. We did not buy anything but talked with the staff and petted the dogs. It was a nice stop to stretch our legs.

We drove a short way from the highway to see the giant people, a quirky item posted on Roadside America. The people were indeed giant concrete structures in Gainesville, Texas. There are still a number of these muffler men as they are known throughout the country but here are five giant people known as the first ever public gathering of two Muffler Men, a Uniroyal Gal, and two Big Johns. These giants stand in front of the headquarters of Glenn Goode, the self-proclaimed fiberglass man. These goliaths are self-standing without guide wires. The size of these big people towered over a cow statue beneath them. Uniroyal Gal is 17 feet tall while the Muffler Men are each 22 feet tall and the Big Johns are both 24 feet tall.

We moved onward to Paris, Texas, a town that most people have heard of despite its size. We stopped at the Visitor Center where Ken and Becky were glad to help and provide yet another t-shirt (Bonjour Y’all from Paris – Texas). They gave us tips of what to see and shop. Ken who is also a member of the Chamber of Commerce walked us around the corner to snap a photo under the painted Paris name on the side of a building. The word PAR*S is missing the letter “I” so that the person standing for the photo becomes the letter “I” in the name while and dotted with the star. 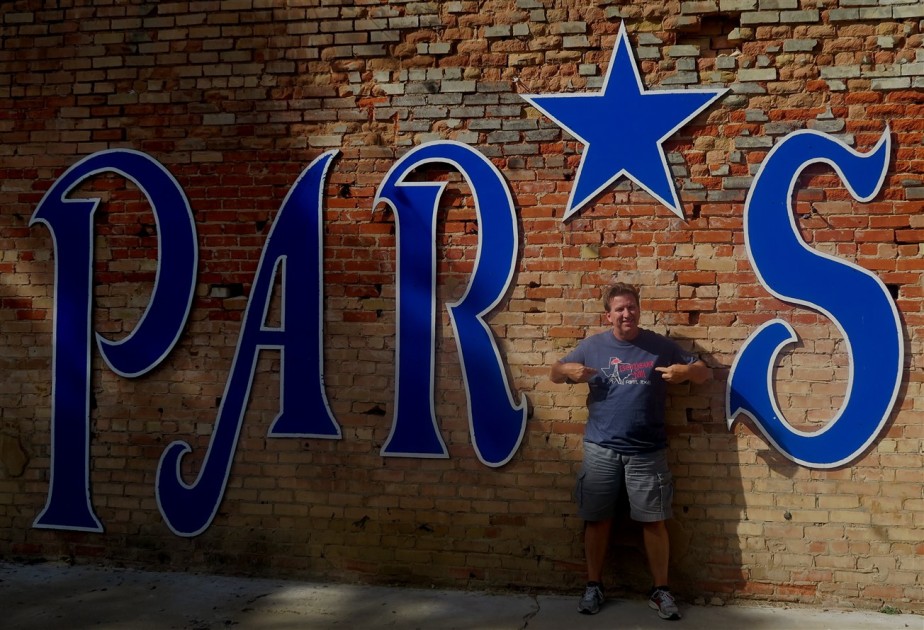 We drove out of town to see Jesus wearing cowboy boots on a gravestone. Under Jesus’ robe is the exposed cowboy boot and is one of the tallest gravestones in the cemetery. The grave is for Willis Babcock.

We drove to the signature feature that best identifies the town of Paris, Texas. Next to the Love County Civic Center stands a 65 foot imitation version of the Eiffel Tower built in 1993. In 1998, as a response to the 1993 construction of a 60-foot tower in Paris, Tennessee, Paris, Texas placed a giant red cowboy hat atop the tower to outdo the Tennessee construction reaching its current height of 65 feet. The current tower is at least the second Eiffel Tower replica built in Texas; the first was constructed of wood and later destroyed by a tornado.

We planned our stay in Texarkana, Texas for the night at the Residence Inn. The hotel had dessert night when we arrived so we grabbed some super sweet chocolate cake and fudge for after dinner. Dinner was at the Longhorn Steakhouse. 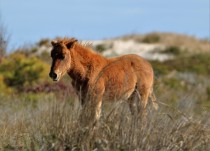