While surfing the internet a couple of weeks ago I came across an ad for ‘Belt Sander Racing’. Intrigued I checked it out – finding that a place in the Franklinton neighborhood of Columbus called the Idea Factor was indeed having Belt Sander Racing, so I signed up.

The Idea Foundry’s motto is to create a place where anyone can explore their urge to make things. It is huge, 60,000 square feet of workshops and offices.

When we arrived we found they were having an open house showcasing all the great things that the artists and craftsmen do there. Outside they had a number of games set up an including over sized Battleship.

Inside the artists were creating new pieces. This young lady was sawing a wine bottle in half with a wet saw.

The artist below specializes in burning wood to make art pieces. The baseball bats with lighting were fantastic.

A chess board on a restore table.

Another example of the fine craftsmanship.

There was a good mix of art and functional.

But enough of that, we are here for —- Belt Sander Racing!

For those movie fans I took inspiration from the 1964 political satire black comedy Dr Strangelove. Given our current political climate I thought the idea of a nut case in charge of a country seemed appropriate.

The specific scene I took was the last scene where Slim Pickens is riding the bomb down to the ground. (for those who are not familiar with the movie it is making a strong case for peace in the world by satirizing the cold war) 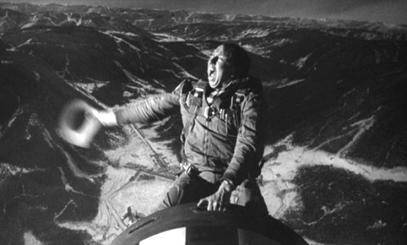 My version – a Captain America doll strapped to a piece of ducting – christened Dr Strangetrump.

There were 11 entries in all.

Finally it was time to race.

The track was laid out with 3 channels – one for each racer and the other for the cords. It was amazing how fast they went.

Some went better than others – as with the actual team, the Cleveland Browns helmet did poorly.

After the first round they had a dog race while they set up for the second round. It wasn’t actually a dog race, a couple of people just set their pooches up on the track and they sort of wandered their way down.

The finals were very close for all 3 heats. Even though I was able to get my racer to run straight and true, I lost in the first round. No matter – it was a blast to do, and I got a cool T shirt!

Wait ’til next year – I will get a faster belt sander.