We were fortunate enough to get tickets to two Open House Special Tours.

Our first tour was of the CTA El Train Repair Shops in Skokie. Directions to our tour was to go to the Howard Street Station on the Red Line and gather on the far end of the platform.

For this Saturday morning the platform was jammed with many people not used to taking the train, as they were in town for the University of Nebraska game against Northwestern in Evanston. To the normal commuter seeing a 1922 El Car come rolling into the station would be a surprise, but to this large out of town crowd it was stunning. 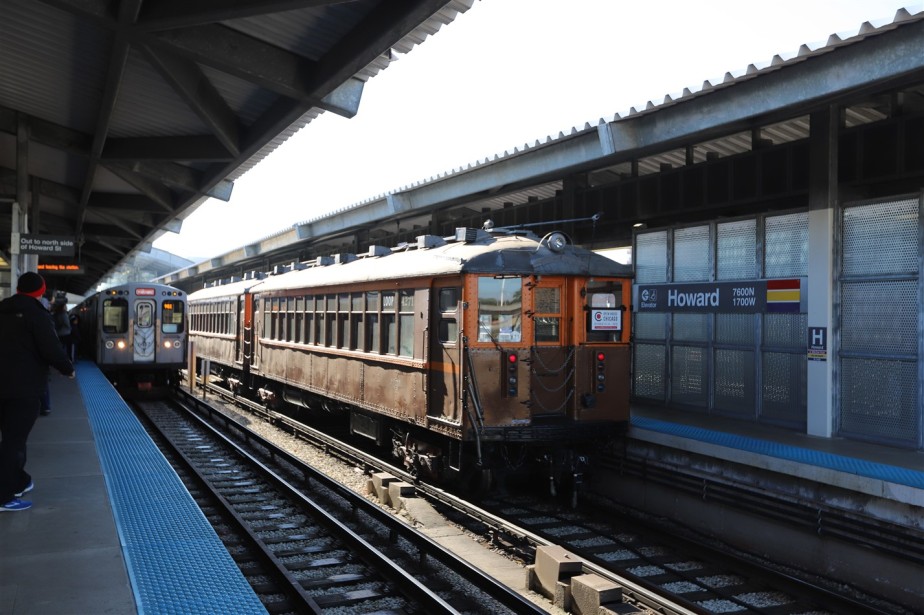 One of the volunteers was dressed in a period uniform.

While others had their safety vests on. All of the vintage cars are maintained by volunteers – many retired CTA workers. 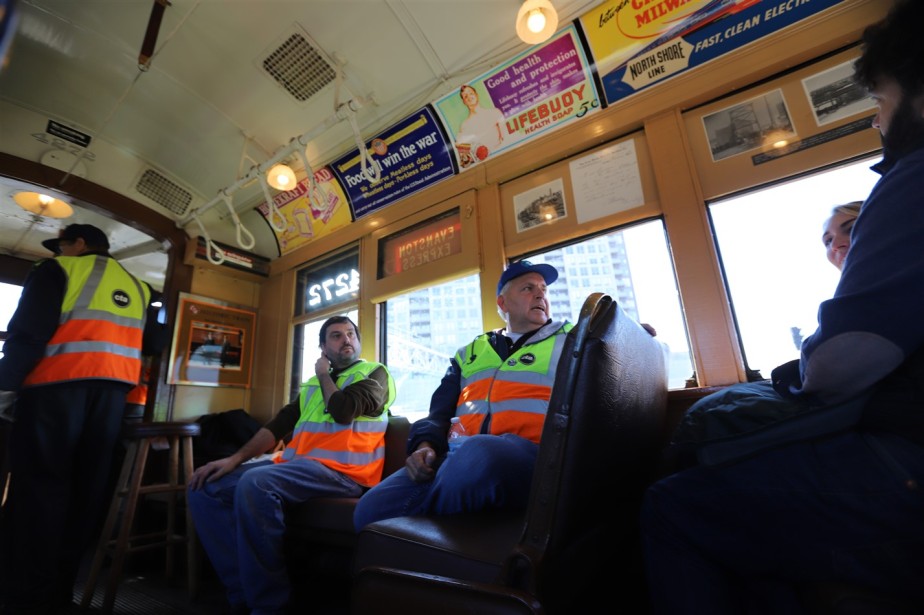 The passengers were excited… 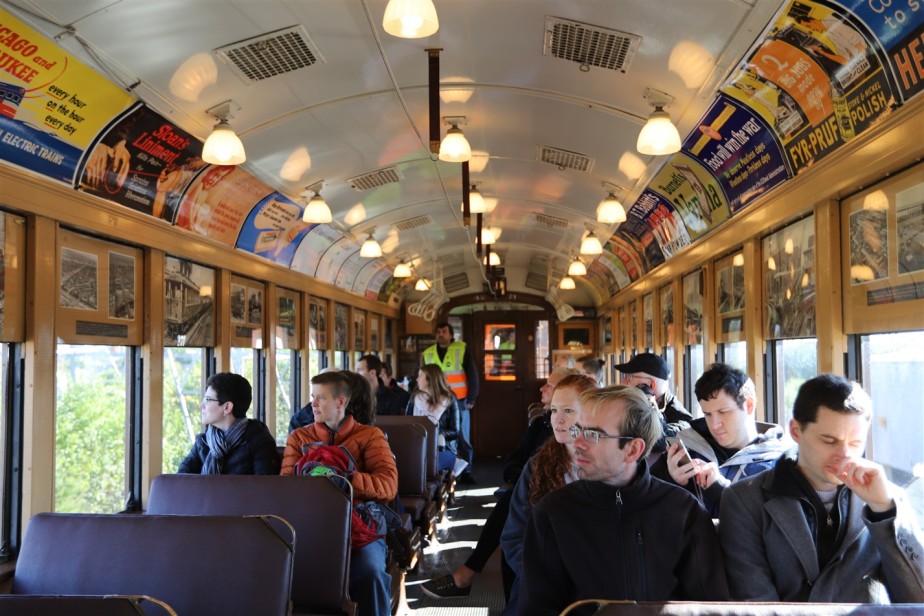 As we arrived at the yard we were greeted by other vintage cars awaiting restoration, as well as the revenue generating current cars.

The 400 series cars really stand out against the modern cars in the yard.

But it was time to tour the shop. 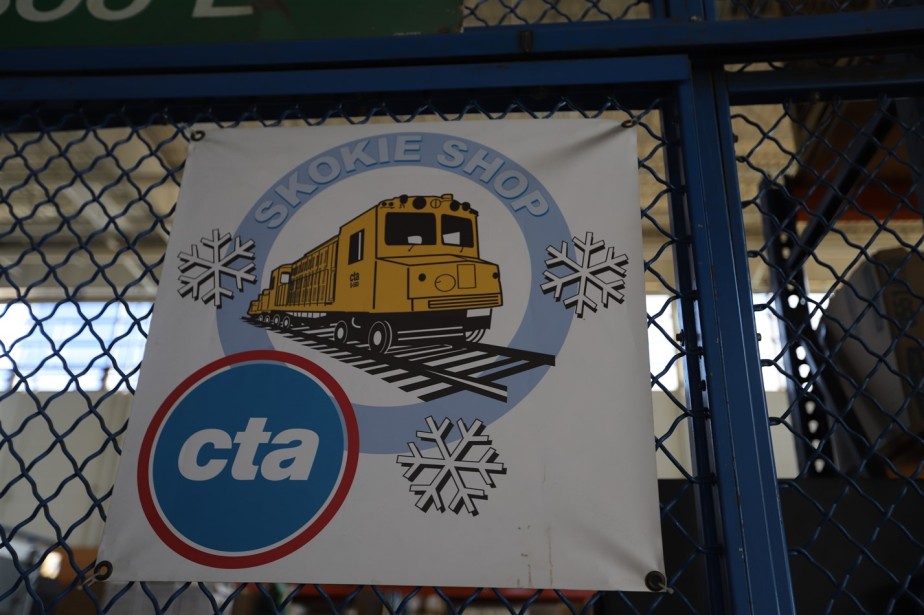 Our tour guide was the manager of the facility.

There were El cars in various states of repair. 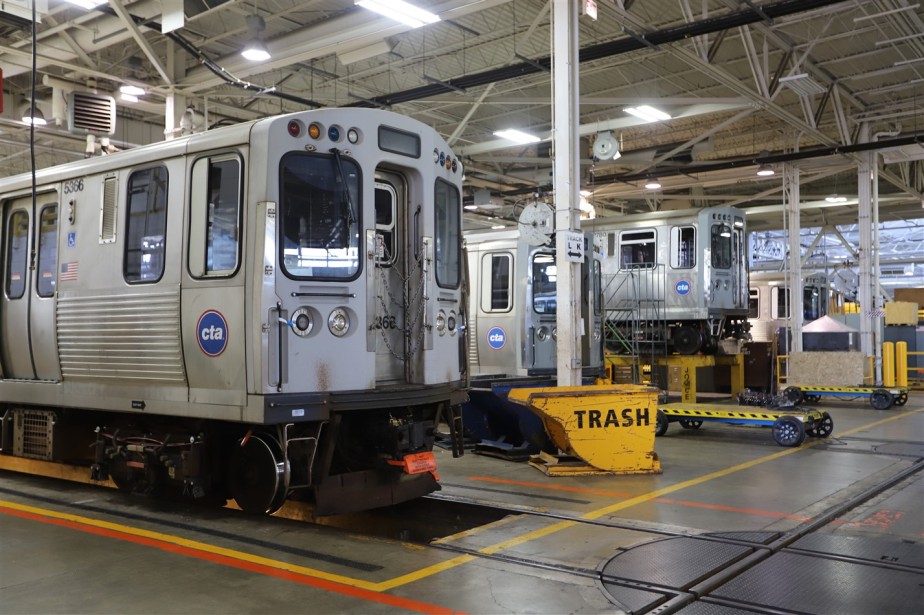 This station refurbishes the wheels.

While another lifts the entire car for easy access.

They also have some bays with pits to get underneath the cars.

A great Chicago tradition is the Holiday Train. Started in 1992, the Holiday Train is a labor of love for the CTA employees who volunteer to work on the cars, as well as the public. During the holiday season the Holiday Train visits every El station on every line, usually taking food baskets to local organizations. 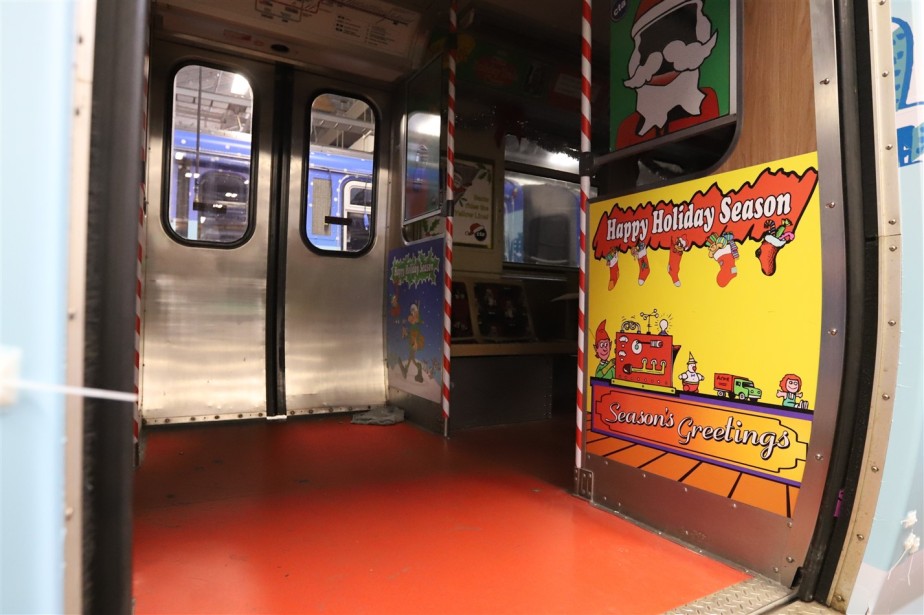 Another vintage car along ithe snow removal engine (minus the blower)

The El Cars have springs and shocks like a regular car, just much larger.

An axle and wheels.

A pile of wheels waiting on refurbishing. 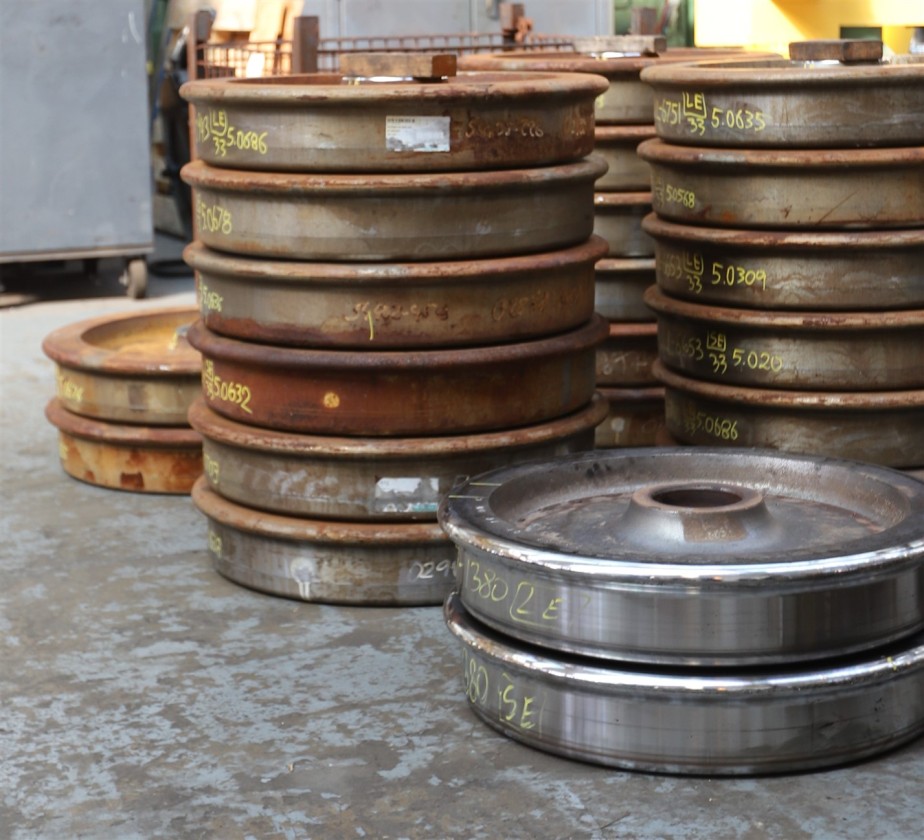 A collection of contact shoes that connect the train to the third rail to provide power to the engines.

A series of trucks ready to go. After this we headed back to our vintage car and returned to Howard Street Station. 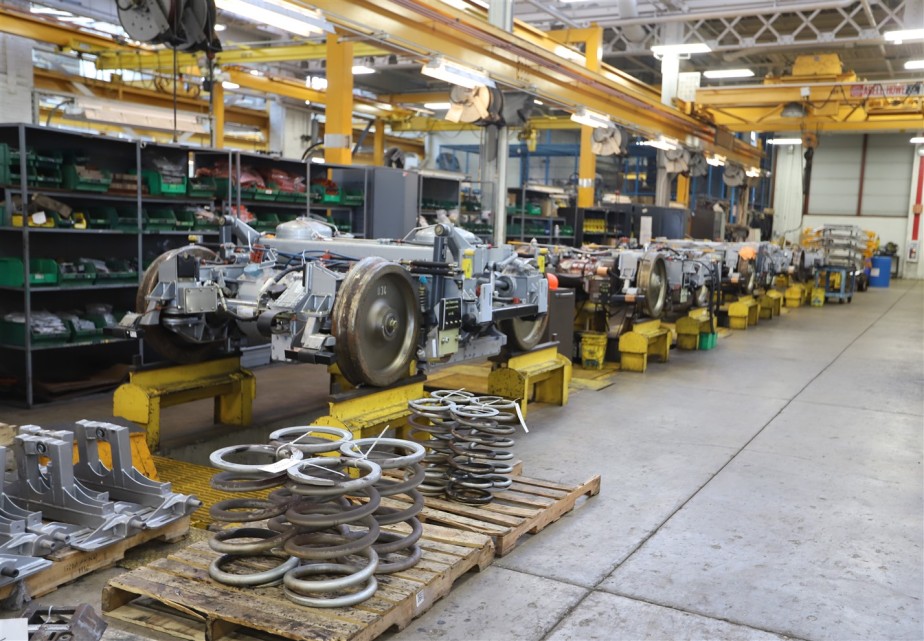 The Chicago Tribune Freedom Center is a printing and inserting facility located along the Chicago River. Built in 1981, it was located along the river with the theory of bringing the paper products directly into the facility by boat, but the first shipment showed that with the bend in the river, the bridges and the building itself they couldn’t get to the dock. While the doors are still there they have never been used for their original purpose.

Our guide was someone from the receiving department.

Our tour of the 800,000 square foot facility started in the warehouse with massive 1 ton rolls of paper. 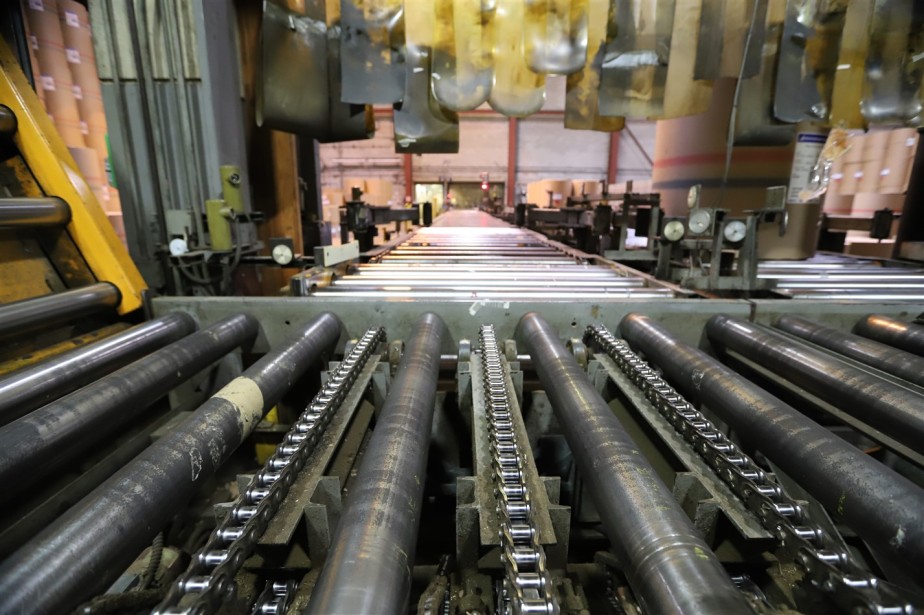 From this warehouse they are loaded onto carts that are electronically routed (via a wire in the floor – 1980s technology at it’s finest) to the appropriate press.

There are a total of 10 massive presses that are used. The Tribune facility prints not only their own newspaper, but also for the regional suburban newspapers, the New York Times and Wall Street Journal for the Midwest, and even their local competitor the Chicago Sun Times.

The tour group was very focused. 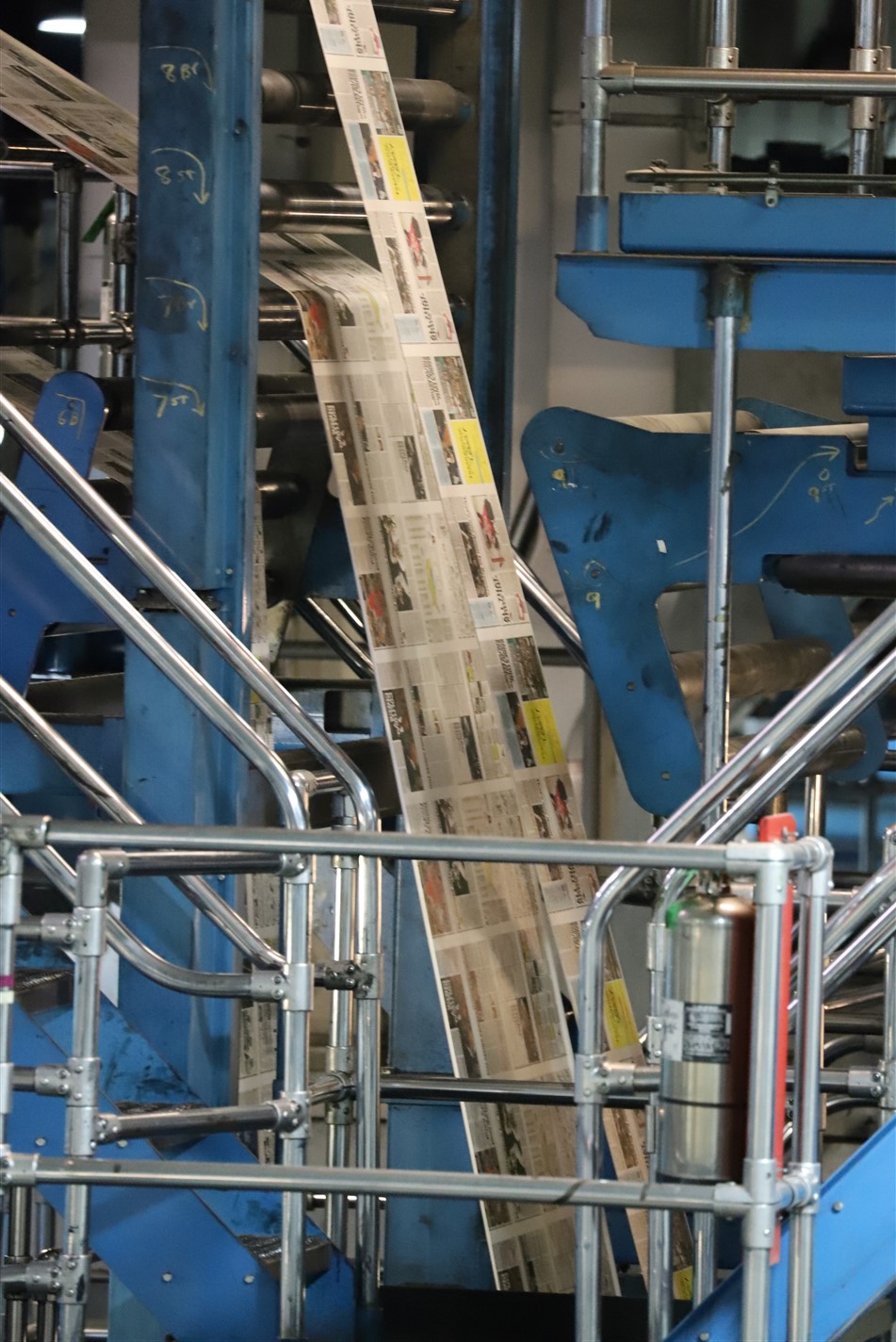 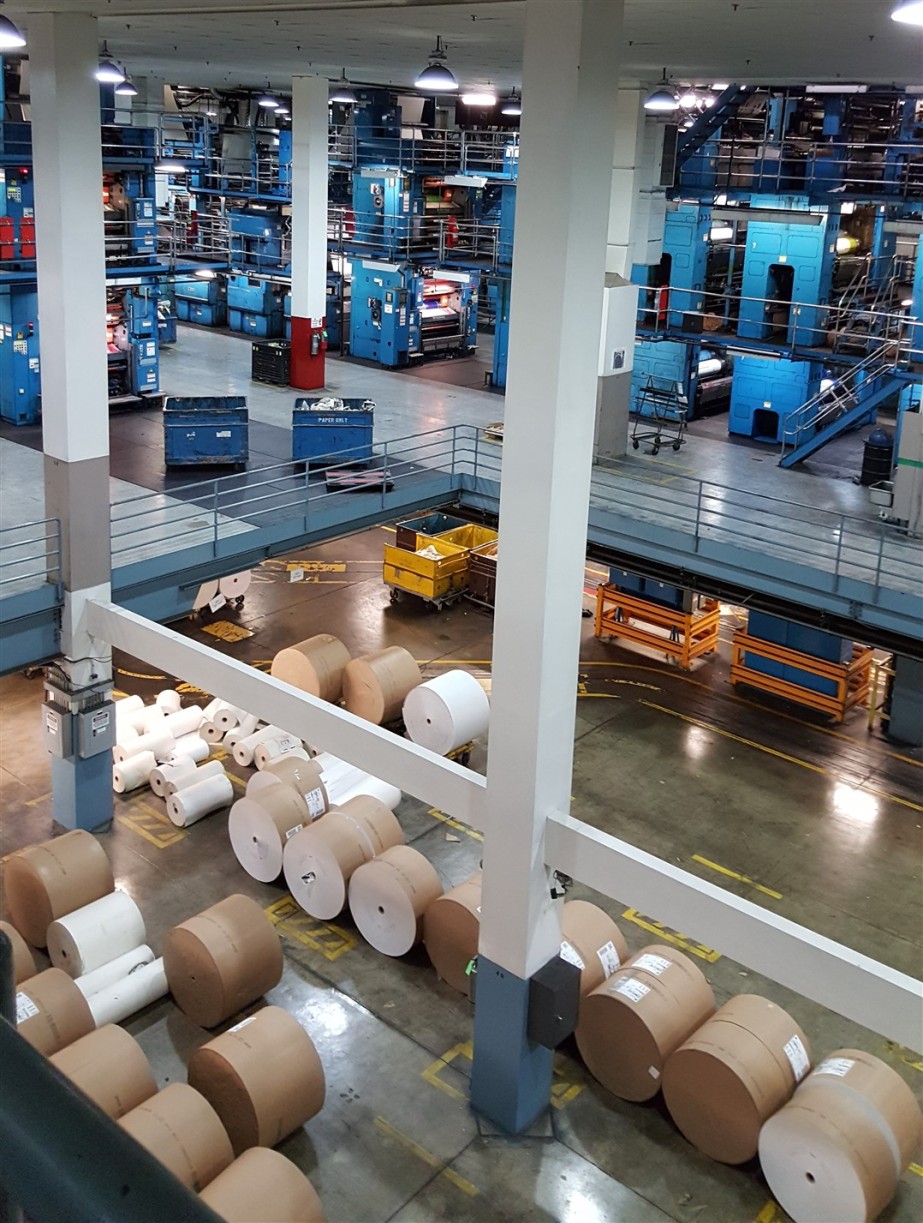 The Chicago Tribune Printing Facility was a great tour – one of the best we have done.