Mid March means it is time for the Piston Powered Show at the IX Center in Cleveland. As the name indicates this show features all things with a piston: Cars, Motorcycles, Trucks, an Airplane, Tanks, Snowmobiles, and even a Steam Shovel – plus a few things without pistons.

Most of the cars are ‘by invitation’, which means they are the best of the best. To make it to be one of the best in a custom car show you must have good graphics – and this show has that. It also has a great collection of people who have as much character as the vehicles – all filling the million square foot (93,000 square meters) building.

As you enter the vast hall you are immediately greeted with some really nice restorations.

As noted previously, many had customized paint jobs including this mid 1960s Chevy El Camino hood.

This customized Willy’s sedan had a matching mannequin.

The participants came from numerous states in a 500 mile radius of Cleveland, including this great paint job from Kentucky.

For some the audience made a good match for the car.

A Zombie car – because why not.

Most of the motorcycles were customized Harley’s, many containing skulls.

Some craftsmen were displaying their skills – he was cutting leather.

This car was a repeat from a couple of years ago that was my posting’s feature photo – still one of the very best custom designs I have ever seen.

A group of local technical high schools were having a competition to tear down and rebuild an engine in less than 30 minutes. Not sure why these guys were wearing helmets though.

While most of the custom bikes were Harley’s this great sport bike paint job features a customization of the ‘Guardians of Transportation’ sculptures on a large Cleveland bridge. Ironically I was wearing my ‘Dia de la Muertos (Day of the Dead)’ T shirt that featured the same sculpture in a skeleton look, so I fit in with the theme on all the bikes.

There was a classic wooden boat display as well. The boats themselves are works of art!

As is this sweet 1948 Buick Convertible.

Even a plain old 1960s Ford Station Wagon can be made to look great.

There were a couple of internet radio stations present – this one is a community station that, among other things, featuring racing.

I am not positive what it is, but I am certain it is NOT a Prius.

Most had pistons, but not this turbine jet car.

Some cars like the ‘rat rod’ rusty, beat up look – some like the pristine restoration. This Paddy Wagon was somewhere in between, but still cool.

Also featured were a number of artists showing how they make the great graphics we saw on all the vehicles.

All obviously have very steady hands.

The detail is amazing.

His shirt says it all.

It is amazing on the metal how little paint it took to go a long ways.

This guy had great pedal cars.

Not sure how a bowling pin got into a car show – but hey it is Cleveland.

The emcee, and auctioneer, had character. She was auctioning off the finished pieces for charity.

Once again the Piston Powered Show was a great way to spend a day inside checking out a great collection of vehicles, people and art. 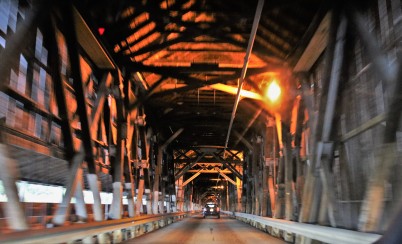