Today’s stop on the virtual tour of the United States is Arkansas. Located in the south central part of the country it is a state I have only visited a couple of times, and then very briefly. I have however managed to collect 34 different years of state highway maps.

The only photo I have taken with Arkansas actually is 1/2 Texas – Texarkana Post Office and Courthouse – literally split down the middle by the two states.

We start today’s tour with a 1958 map highlighting a freeway interchange in Little Rock. While there have been limited access highways in the United States since the 1930s, the U.S. President in the 1950s, Dwight Eisenhower, was a strong proponent on the improvement of the road system in the country. As a result the Federal Aid Highway Act of 1956 was passed.

This act authorized the construction of 41,000 miles of limited access (no crossroads, etc) freeways. While some states had made some significant progress by 1958, in Arkansas it was limited – the exit shown was one of just a handful in the state.

We move ahead 10 years to 1968 and find the cover with a nice view of the Ozark Mountains. The Ozarks aren’t particularly high, reaching a maximum elevation of 2,560.

While the Ozarks reach into Missouri, they are best known as part of Arkansas. As this photo shows the terrain is tree covered with numerous rock outcroppings. In addition there are a number of scenic rivers and lakes.

The 1970 map starts an amazingly long period where the look of the maps do not change. The maps are consistently basic, with the inside being the statewide map, and the backside having a few city maps. Unlike most states there is little in the way of tourist information like guides to parks.

The covers continue to highlight the natural scenery with this view of the Ouachita Mountains. Much like the Ozarks they are relatively small, tree covered mountains. As the map notes this view is overlooking the Hot Springs National Park. Situated next to the city of the same name Hot Springs has long been an attraction.

The town has famous and infamous periods, including being an attractive location during prohibition for people like Al Capone to come hang out. The town has a collection of historic bathhouses and many other architectural significant buildings.

This checkered history is celebrated with a statue of Al outside the Ohio Club in Hot Springs. (photo from Dayton Daily news website). 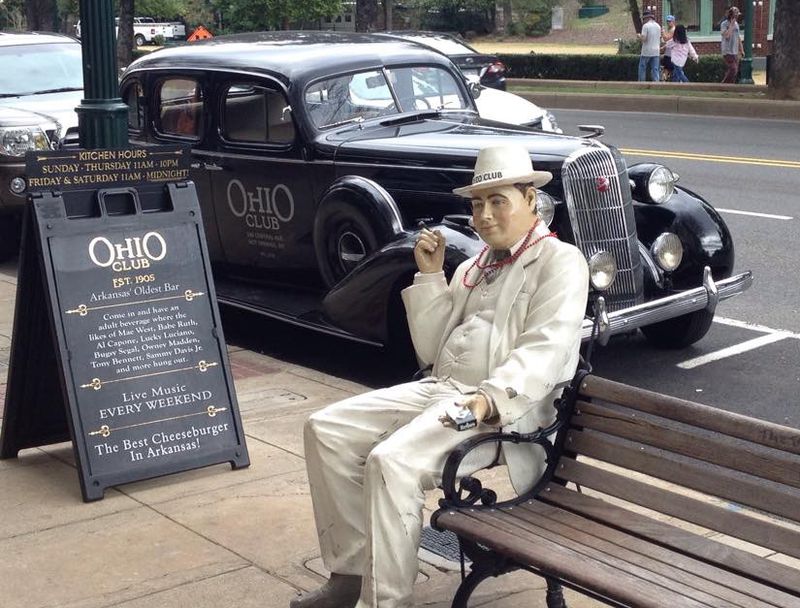 By 1972 the Interstate System was nearing initial completion. This view features Crimson Clover for ground cover.

More than just a 1960s pop song, Crimson clover is a winter annual and herbaceous legume. The leaves and stems of crimson clover resemble those of red clover, but the leaves are round-tipped with more hair on the stems and leaves. Seedlings grow rapidly from the crown forming a rosette. This rosette enlarges as weather becomes favorable. In the spring, the flower stems develop rapidly and end their growth with long, pointed conical flower heads comprised of 75 to 125 florets. Florets are a bright crimson color and open in succession from the bottom to the top

This image (from the internet) gives a nice closeup of Crimson Clover.

The 1973 map has a view of Little Rock, the largest city and capital. With about 700,000 people in the area it makes up about 20% of the states population.

With it’s location near the Ouachita Mountains, the city is made up of some rolling hills, along the Arkansas River.

This photo from the internet shows that the skyline has changed little in the 40 + years since this map was published.

For the American bicentennial the cover is a tribute to the early pioneers.

The eastern border of Arkansas is the lower Mississippi River. This area is known as the Arkansas Delta, which has geographic similarities to their neighbors in Mississippi. It is the region where cotton is grown.

The area is dotted with lakes, many of them as a result of the river changing course over time. The bald cypress tress shown here are typical of the area.

The area is also known for their music, including blues and country. The most famous person from this area is Johnny Cash. 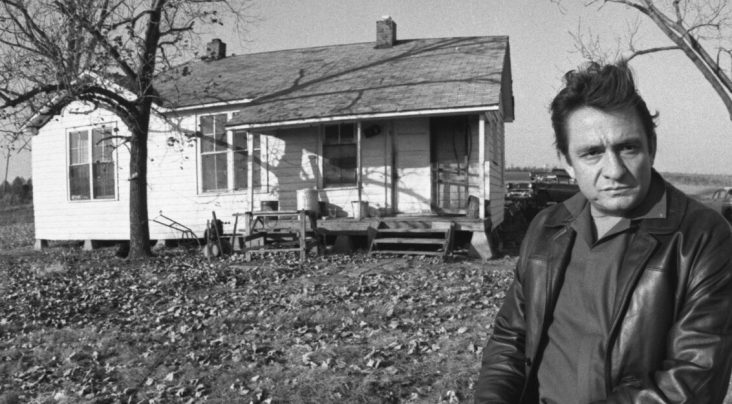 The Arkansas State Capitol is featured on the 1979 map. As with the vast majority of state capitol buildings in the country it is built in the Neoclassical style. This building is much newer than many other state capitols, having been completed in 1915.

For 1981 the photographer chose a view of a small river (the Spring River), a two lane road and a train.

The Interstate 40 bridge linking West Memphis, Arkansas and Memphis, Tennessee is featured on the 1982 cover. Covering a distance of 9400 feet, and rising over 100 feet above the river, the official name for this bridge is Hernando de Soto Bridge. The two arches of the bridge are to represent the letter ‘M’ (for Memphis), hence the nickname of the structure is the M bridge.

This photo from the internet shows the bridge at night with the ‘M’ lit up. Photo by Trevor Birchett. 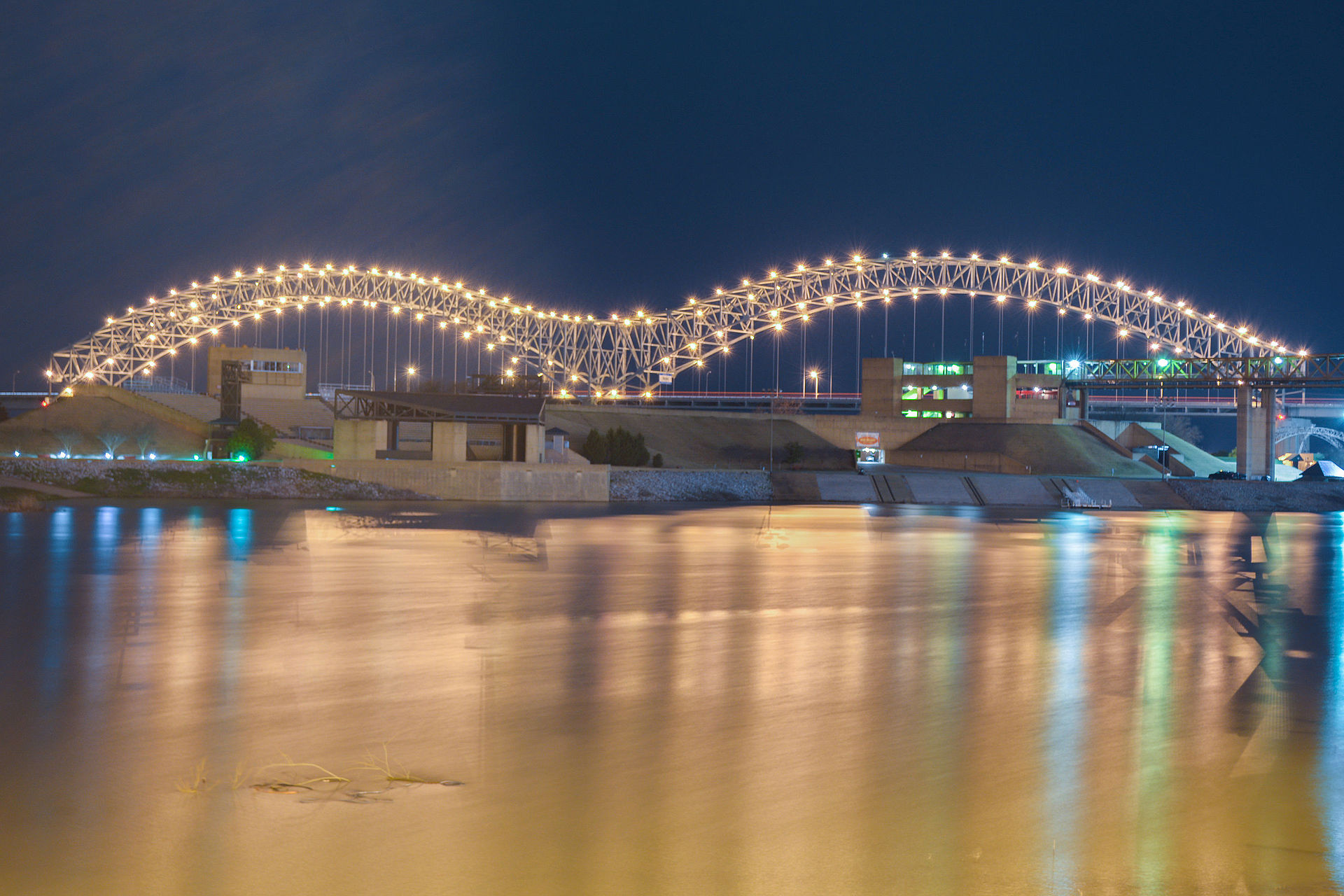 The photo for the 1984 edition shows the early fall scene in Garland County. With Arkansas being located in the south this scene likely dates from late October or early November.

Garland County is the home of Hot Springs.

Another year (1985) another two lane road in the woods. This time we are in Yell County. Strangely this relatively small county, in both population and square miles, has two county seats. In addition it is a ‘dry’ county, with no alcohol sales. Perhaps that is why they Yell.

The Interstate 430 bridge over the Arkansas River at Little Rock is shown on the 1986 map. This freeway bypasses the city to the west.

The 1987 map has a radical departure on the look of the title on the cover, but not much else. More bridges and roads through the countryside.

Once again in 1989 the scene goes unidentified. But good news – there is a bridge involved.

For 1990 we get a return of the red backgrounds for the titles, along with descriptions of the scene. This view is from Highway 7 in Perry County, with a dogwood tree in full bloom in the foreground.

Perry County is home to a huge Goat Festival (photo from KARK TV station). The festival attracts 4000 people to the small town of Perrysville. 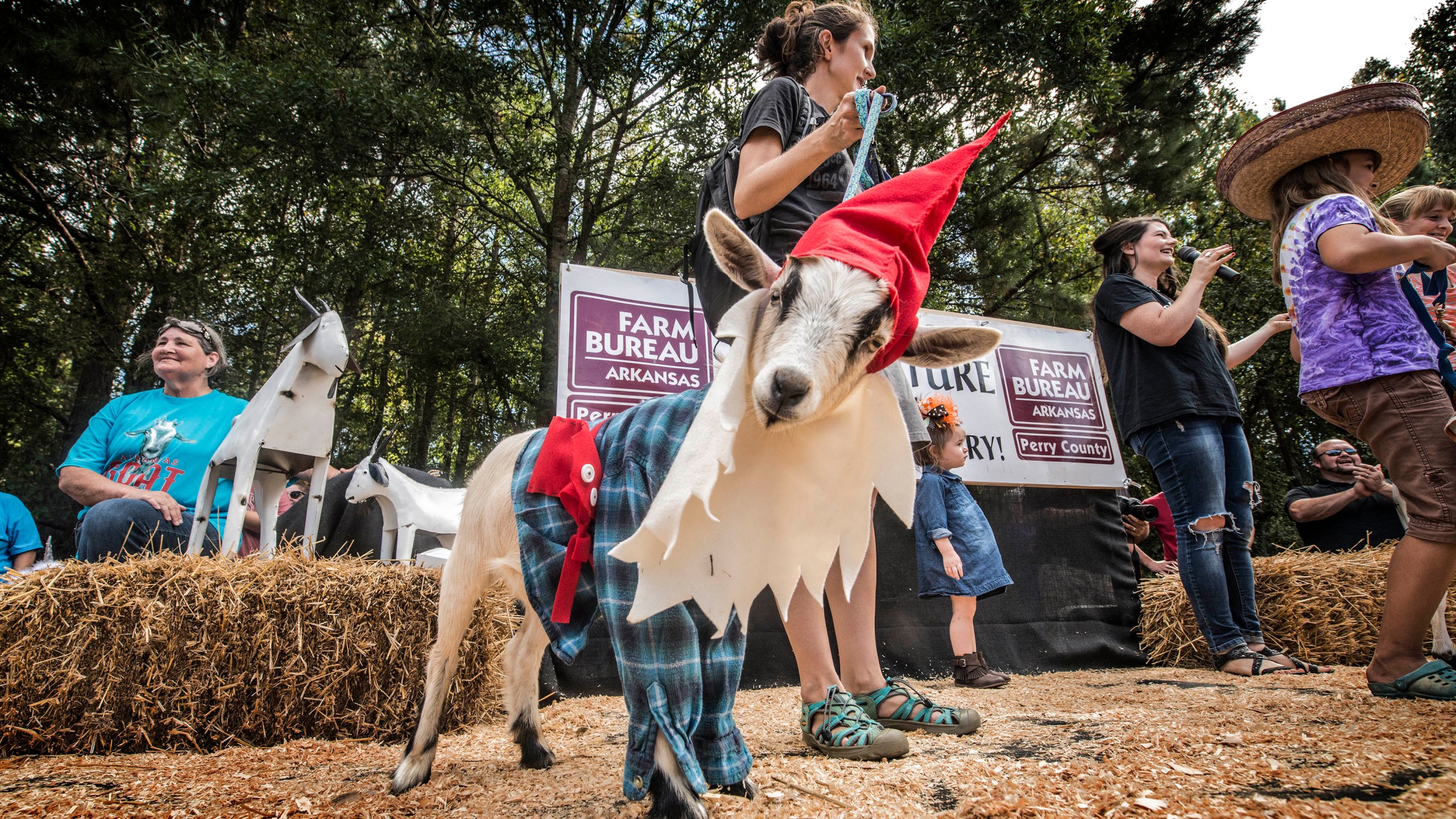 Big changes for the Arkansas map in 1993 – Bill Clinton, a native son was elected president. Unfortunately they have returned to photos of generic scenes without descriptions. This pattern continued for the next few years.

For 1998 the descriptions have returned. This mountain scene is U.S. Highway 65 near the Buffalo National River in Searcy County.

Searcy County is known as the Chocolate Roll Capital of the World. A chocolate roll is a crust filled with chocolate. A recipe found on the internet could be a good thing to fill some time today….

Incorporate all pastry ingredients into a pie crust-like dough. Roll out. Cream together cocoa powder, sugar and butter and spread on surface of pie crust. Roll from one end, tucking in sides like you would a burrito. Bake at 350 degrees for 10 to 15 minutes or until golden and molten. Let cool 10 minutes before serving.

In 2001 we visit Beaver Lake Dam in Carroll County. The dam has created a large lake that provides recreation as well as drinking water for much of Northwest Arkansas.

A Corvette and a country road back in Perry County. Since this county is dry too, they are likely headed to the next county to buy a bottle of wine for dinner.

In 1803 the United States purchased a massive area (828,000 square miles) of land from France for only $15 million dollars. What seems like a good deal was likely a better deal for France as they really didn’t control most of the land – it was still inhabited by Native Americans. The U.S. was buying ‘preemptive’ rights to obtain the Native lands by treaty or conquest (steal).

The entire state of Arkansas was included in this deal.

To get your Kicks on Route 66 in Arkansas you have to go to Stone County and take the state highway with that number, since the famed U.S. highway of the same number did not go through the state, although it went nearby in southwest Missouri.

The 2005 map shows the field of daisies at an Interstate interchange. Given the view you would think that the daisy would be the state flower but it is not. The state flower is the apple blossom, a tribute to the time when Arkansas was a large apple producing state, which it no longer is.

The 1956 Interstate Act 50th anniversary is celebrated on the 2006 map. Ironically neither of the two freeways shown here are interstates, they are both state routes.

The tunnel shown here is the Bobby Hopper Tunnel. It is the only vehicular tunnel in Arkansas.

For 2009 the cover shows the recently completed Greenville Bridge, a cable stayed design over the Mississippi River. Construction of this bridge took 16 years.

The new bridge replaced one built in 1940.

Hot Springs National Park is the scene again for the 2010 map.

As noted previously there are numerous bathhouses in Hot Springs, including one that was in the park itself. The Ozark Bathhouse was closed in 1977 and restored as the National Park Visitor Center. (photo from NPS site) 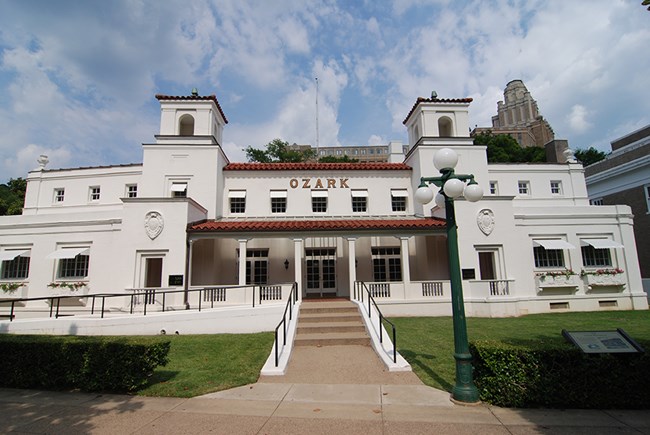 Another two lane road in 2011 – this time in Pope County. Located in the north central part of the state it is home to the town of Russellville. It is yet again another dry county.

Logan County is featured on the cover of the 2013 map. This county was originally called Sarber County, after John Sarber, when it was formed in 1871, but the locals felt Mr Sarber was a carpetbagger, so they renamed the county for an early settler James Logan.

Like most of the scenes in the series of Arkansas maps, it is located in the Ozark Mountains.

The theme continues in 2015 with this scene from Stone County.

The historic Lawrence County Courthouse is featured on the 2016 map. The courthouse is part of the Powhatan Historic State Park. And yes Lawrence County is like most of north and west Arkansas in that the county is dry. Lets move on to California so we can have a beer!