Today’s virtual travel takes us to Idaho. The first map in the collection dates from 1959.

It highlights, among other things, snow skiing.

Easily the most famous ski resort in Idaho is Sun Valley. With the success of the 1932 Winter Olympics in Lake Placid, New York, skiing became much more popular.

In those days railroads were always looking for ways to increase ridership, and a common approach was to develop resorts as destinations. The chairman of the Union Pacific Railroad, Averell Harriman, was one of those executives that took that approach. After searching the west for the perfect location he was told by one of his workers that the area near Ketchum, Idaho had spent more money for snow removal than any other location on the line.

Harriman purchased almost 4000 acres, and voila, Sun City was born. He built a lodge, and the ski runs and the rest is history. (image from website alpinestyle56)

Today it is a premier destination, and home to many of the rich and famous. (photo from Forbes Magazine) 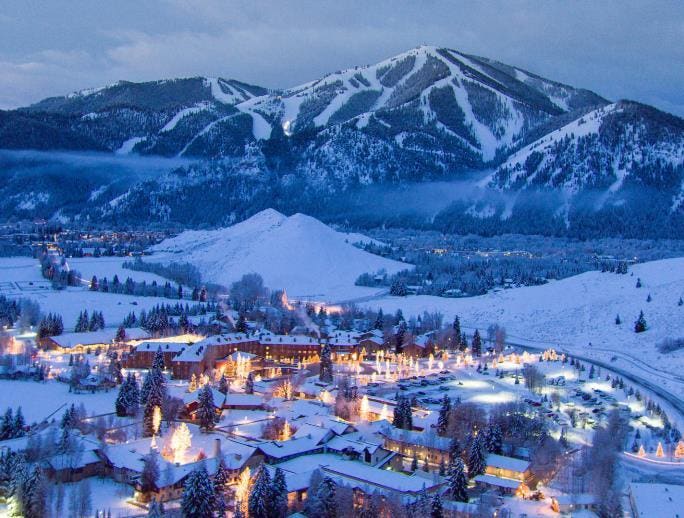 1969 – Bruneau River Canyon. This canyon reaches heights of 800′, making it one of the deepest canyons in the country.

1970 – Lake Pend Orielle. The largest lake in Idaho, and 38th largest in the country, it reaches a depth of 1150′ in some areas. During World War II it was the second largest naval training center in the world.

1978 – Mountain Valley Scene. The Rocky Mountains run the entire length of the state. The highest mountain is Mount Borah, which is featured on the cover below.

This mountain has an elevation of 12,662′ (3859m). Ironically until 1934 this mountain did not have a name, but when it was calculated it was actually taller than what at the time was thought of as Idaho’s tallest, it gained it’s name.

Boise State has had a very successful football program for decades now, but is most famous for their blue astroturf field.

Why is it blue? When the stadium was first opened in 1970 it had the traditional orange running track around it. Since their colors were orange and blue Gene Bleymaier, the athletic director at the time decided to see if they could get blue astroturf – and the rest is history.

Legend has it that ducks go crashing into it thinking it is water, but many believe that is an urban legend. 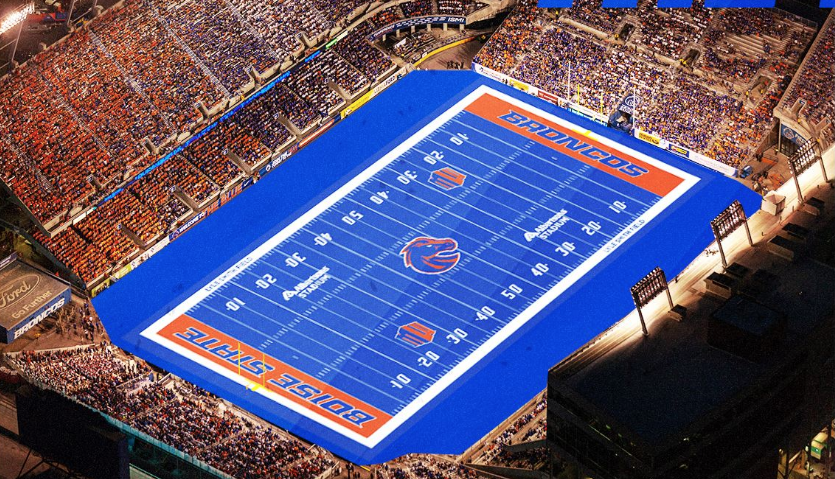 1993 – Tribute to the Oregon Trail. This 2000 mile trail supported covered wagons moving settlers west from Kansas to Oregon. Over the years 400,000 settlers made their way down the trail, which was eventually made obsolete by the trans continental railroad.

This photo from Scottsbluff, Nebraska shows a portion of the trail and a typical wagon.

1994 – A tribute to state parks in Idaho. This view shows the Sawtooth Mountain Range.

The largest state park is City of Rocks. This park has a large amount of granite rising from the landscape. It is a popular rock climbing region. (Photo from Wikipedia) 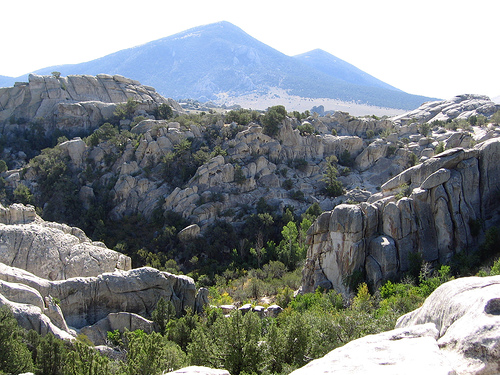 1997 – Little Redfish Lake. This lake is located in the Sawtooth National Recreation Area.

Named for the red scaled sockeye salmon, these lakes offer beautiful views of the surrounding mountains.

This mountain is located next to Stanley Lake. (Photo from Wikipedia)

2003 – Camas Prairie and the Smoky Mountains.

The prairie is named for the camas, a Native American food source. (photo from USDA website).

2004 – Another visit to Little Redfish Lake.

2006 – Bitteroot Mountains. Located int he northern panhandle of Idaho, the Bitteroots have two peaks that reach over 10,000′.

2007 – Unidentified mountain scene with a focus on the 100th anniversary of Idaho State Parks.

2008 – Boise. As the largest city in the state, Boise is the center for commerce and government.

Our time in Idaho has been very limited, but still offered some great views and unique experiences.

Back side of the Grand Tetons from the Idaho side.

On a trip from Jackson Hole, Wyoming to Salt Lake City we caught a cattle drive in the middle of the road. Most cows made their way around our car, except one decided to stop and lick the bugs off of the hood…

And a stop in Lava Hot Springs.