Today’s visit is to Kentucky, and the vast horse culture that exists there. But there is far more to Kentucky than horses.

The first map in our journey dates from 1942. Interestingly the state highway map  was contained in a booklet that gave tourist information based on the roads of the day.

The most famous of these roads was the Dixie Highway. Originally part of the National Auto Trail system in the very early 1900, the Dixie Highway modeled itself after the Lincoln Highway in that private promoters lead the effort to build it.

When the federal government took over the route it was assign along U.S. 25 through most of Kentucky. The route was dotted with motels and restaurants for the travelers headed from the Midwest to Florida. When the interstates came along I-75 replaced it. 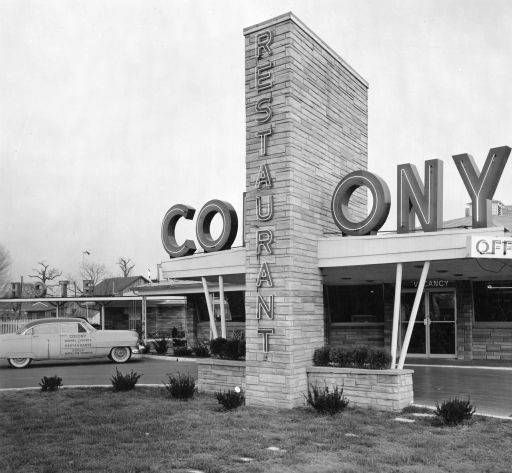 Much of Eastern Kentucky is in the Appalachian Mountains. This is coal country, with winding roads going up and down the mountains.

Today the vast majority of the roads are still twisty two lane routes.

Appalachia has had tough times for decades now, with most of the population long ago heading north for jobs in factories. Today few coal mines still exist, most have closed leaving relics behind.

Kentucky is horse country. It is estimated that nearly 100,000 jobs in Kentucky depend on horses. It is the number 1 producer of thoroughbreds in the nation.

This fact is celebrated on numerous map covers including this 1945 map.

In 2019 we had the opportunity to visit Claiborne Farms near Paris, Kentucky. The horses are beautiful, and the grounds immaculate.

This 1949 map features Eggner’s Ferry Bridge. This bridge was completed in 1932, and decommissioned in 2016. A new 4 lane bride has replaced it.

With the Ohio River bordering the entire northern side of Kentucky there are a number of impressive bridges linking the state to it’s neighbors.

The new cable stayed bridge at Owensboro was featured in 2003.

More than just chicken, a Kentucky Colonel is an actual title of honor that the governor of the state can issue to individuals.

Prior to the 1930s very few people were made Kentucky Colonels, but the governor of the time greatly accelerated the number including one Harland Sanders – hence the name of the founder of Kentucky Fried Chicken (KFC).

To this day if you find yourself in Corbin, Kentucky you can stop by the original Sanders Cafe for some fried chicken. (photo from tripadvisor.com) 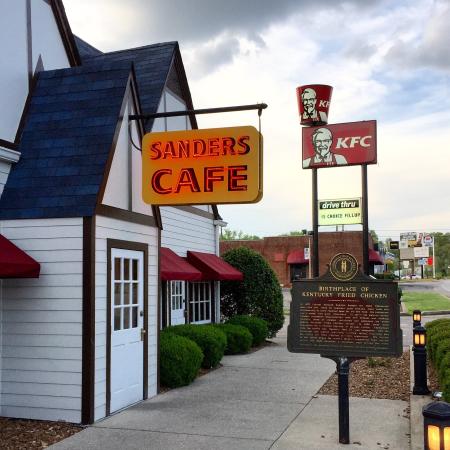 For the mid 1960s Kentucky still showed their southern side with a lawn jockey and a plantation house being featured.

1966 – Daniel Boone. Boone was born in Pennsylvania and spent a great deal of time in Virginia before arriving in Kentucky. It was here his actions became lore.

The 1970s featured the Kentucky Parkways. The state was ahead of their times in building additional freeways to augment the interstates that were in the state. They did this in the form of toll roads.

Despite the names the Parkways do not prohibit truck traffic.

In the days before electronic amplification they had to have a way to notify the jockeys it was time to come to the starting gate, hence the trumpeter. The song they play is called ‘First Call’, a military march.

When people make a list of the greatest race horses of all time there are really only two, Secretariat and Man o War. Secretariat is Man o War’s grandson.

How good was Secretariat. He still holds records 40 years later. The photo below from the legendary Belmont that he won by 31 lengths! 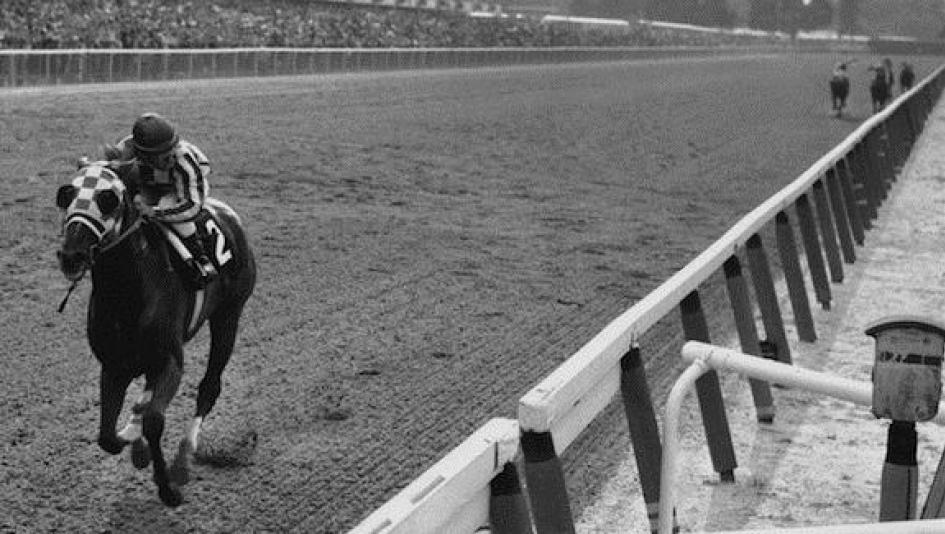 Man o War was just as impressive. In 1920 he was co-athlete of the year with Babe Ruth 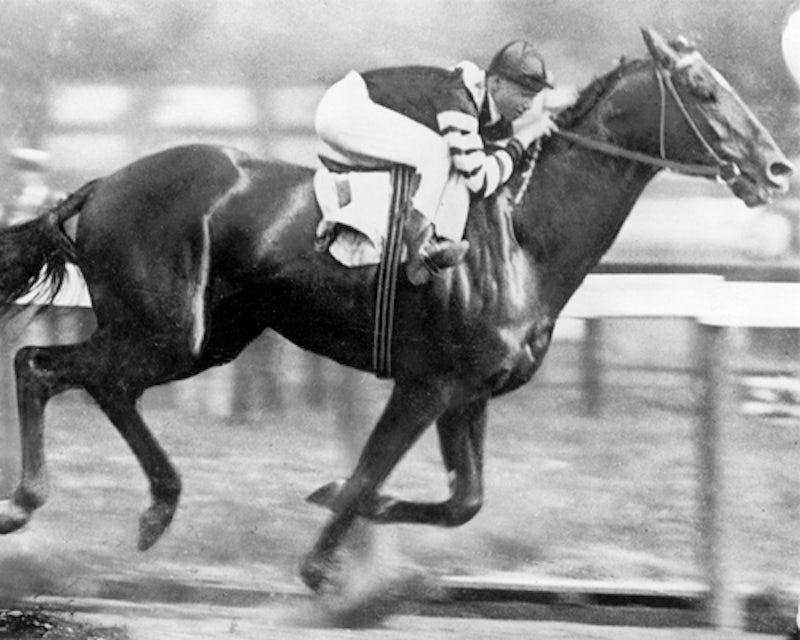 Man o War has a statue at the Kentucky Horse Park 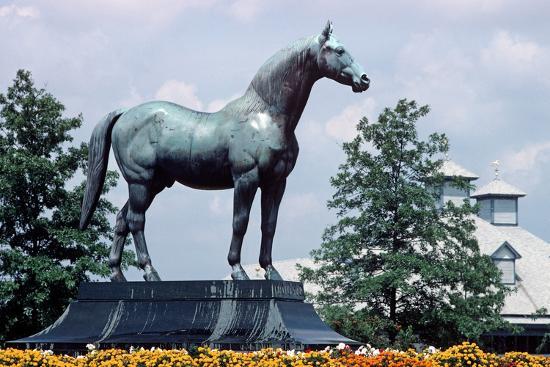 Seretariat’s statue is at Keeneland. 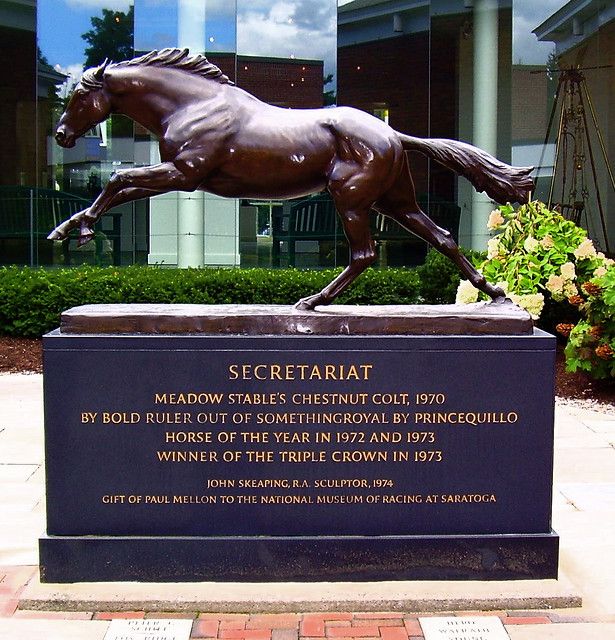 Both are representative of the best of Kentucky Horse Racing. Along with the great thoroughbreds are great tracks.

The two best are Churchill Downs in Louisville and Keeneland in Lexington.

Kentucky has a number of nice state parks with lodges. This is Cumberland Falls Park Lodge.

The Cumberland Gap is a pass in the Appalachian Mountains, at the point where Kentucky, Virginia and Tennessee come together.

It was the first primary route over the mountains for the early settlers. For millenia bison had used the pass to make their way back and forth for feeding. The folklore of Daniel Boone was enhanced by his effort to blaze a trail through the mountains.

Today a twin tube tunnel makes the pass much easier to traverse. Each tunnel is 4600′ long.

The Cumberland Gap National Park has some very scenic overlooks.

There are 10 Scenic Byways in Kentucky.  These byways take you to the less traveled parts of the state for some unique sights like…

Nada Tunnel. That small hole in the bottom of the hill is indeed a tunnel for auto traffic.

2004 – Paris Pike. This stretch of highway was a very dangerous 2 lane road. When the decision was made to expand to 4 lanes the Department of Transportation worked with many to come up with an aesthetically pleasing but functional road.

The road leads from Lexington to Paris. The town of Paris is the center of the thoroughbred farms. It is a very picturesque town, complete with a mini Eiffel Tower.

The State Capitol is in the small town of Frankfort. The current Capitol was completed in 1909.

The grounds are very well groomed and include a floral clock.

The former capitol is down in the middle of town.

Just outside of town are some bourbon distilleries that were built more than 100 years ago, shuttered, and recently re-opened. It makes for a very cool environment.

Nearby is the city of Lexington, home of the University of Kentucky.

The city is home to a vast array of murals, some of the best we have seen.

The Corvette Museum is in Bowling Green.

2014 – Old Friends Retirement Home. While some race horses live a pampered life being set out to stud, many do not. In 2003 Boston Globe movie critic Michael Blowen lead an effort to open this farm for retired race horses.

The longest cave system in the country, Mammoth Cave has more than 400 miles of surveyed passageways. Photo from tourist website as I am terrible with cave photography.

2018 – Culinary Trail. The most famous culinary trail in Kentucky is the Bourbon Trail.

While we didn’t do the entire trail we did tour the Jim Beam Distillery.

This storage facility burnt in a fire in 2019.