For some reason the people of Amarillo, Texas like to take large vehicles and plant them in the ground.

South of town is Combine City. Since 2002 a farmer named Orville Ladehoff has been ‘planting’ old combines in the ground. Today there are 14 of them sticking up in the Texas prairie.

Slug Bug Ranch is east of town. Here there are 5 VW Beetles stuck in the ground much like the more famous one on the other side of town.

There are a few other items on the grounds that are also covered in graffiti.

By far the most famous in town, and likely in the world is Cadillac Ranch. Since 1974 these old Cadillacs have been sticking out of the ground in the Texas panhandle.

Note – they are not supposed to be in a pond, but there had been lots of rain so it appears they are partially under water.

A cold, rainy , dark morning greeting us as we left Albuquerque for the long drive to Oklahoma City. Our route, I-40, parallels U.S. 66 the entire route, and most of the towns that have been bypassed try and entice you off the interstate with Route 66 kitsch. We finally succumbed to the allure at Tucumcari, New Mexico as we drove along Route 66. The town now seems vacant and most buildings are boarded up and dilapidated. We did see some Route 66 murals and signs of a once vibrant area. 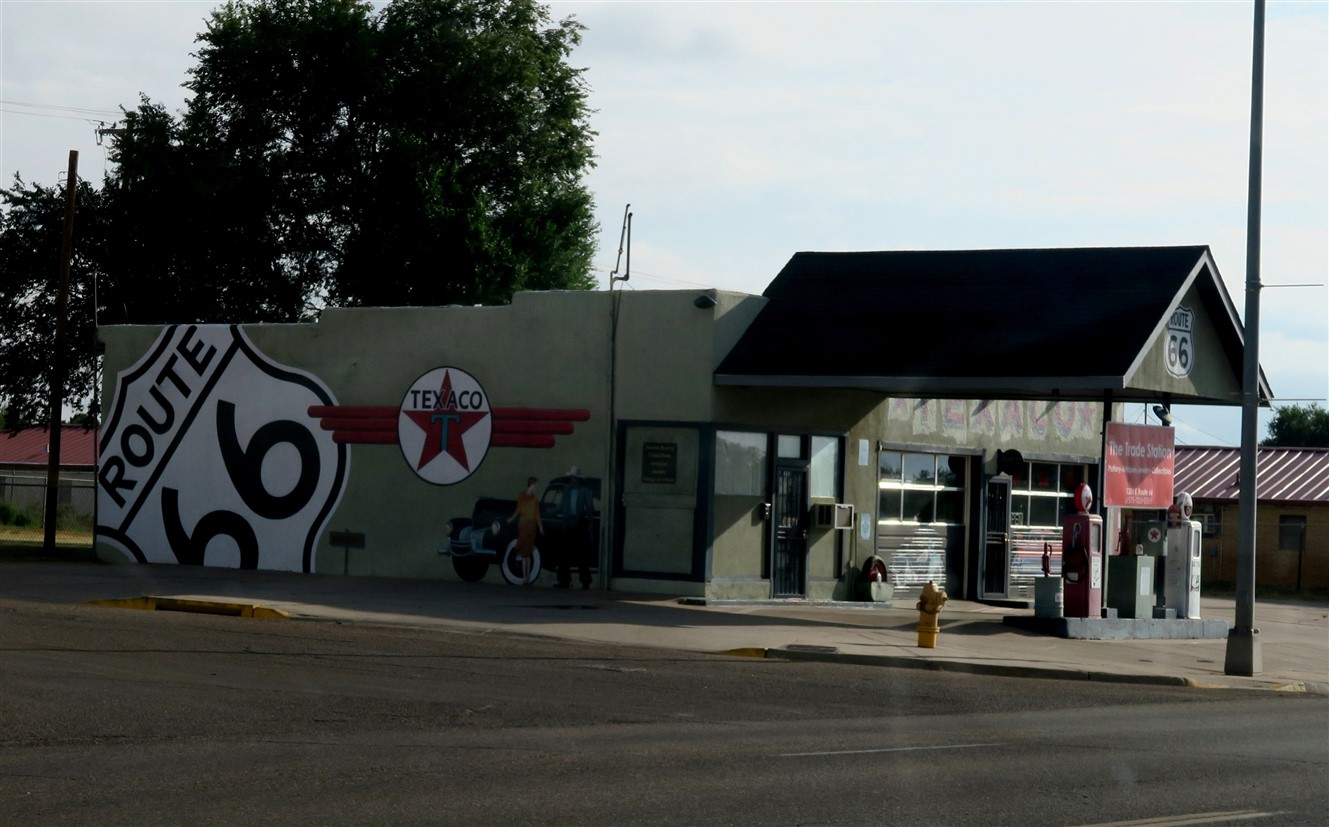 After passing through town, essentially non stop, we were back on the Interstate.Just before the Texas border we near Glenrio, New Mexico at Russell’s Traveland.  Here the owner has a private collection of cars and 1950’s memorabilia nicely displayed next to a 1950’s diner, novelty store and gas station. 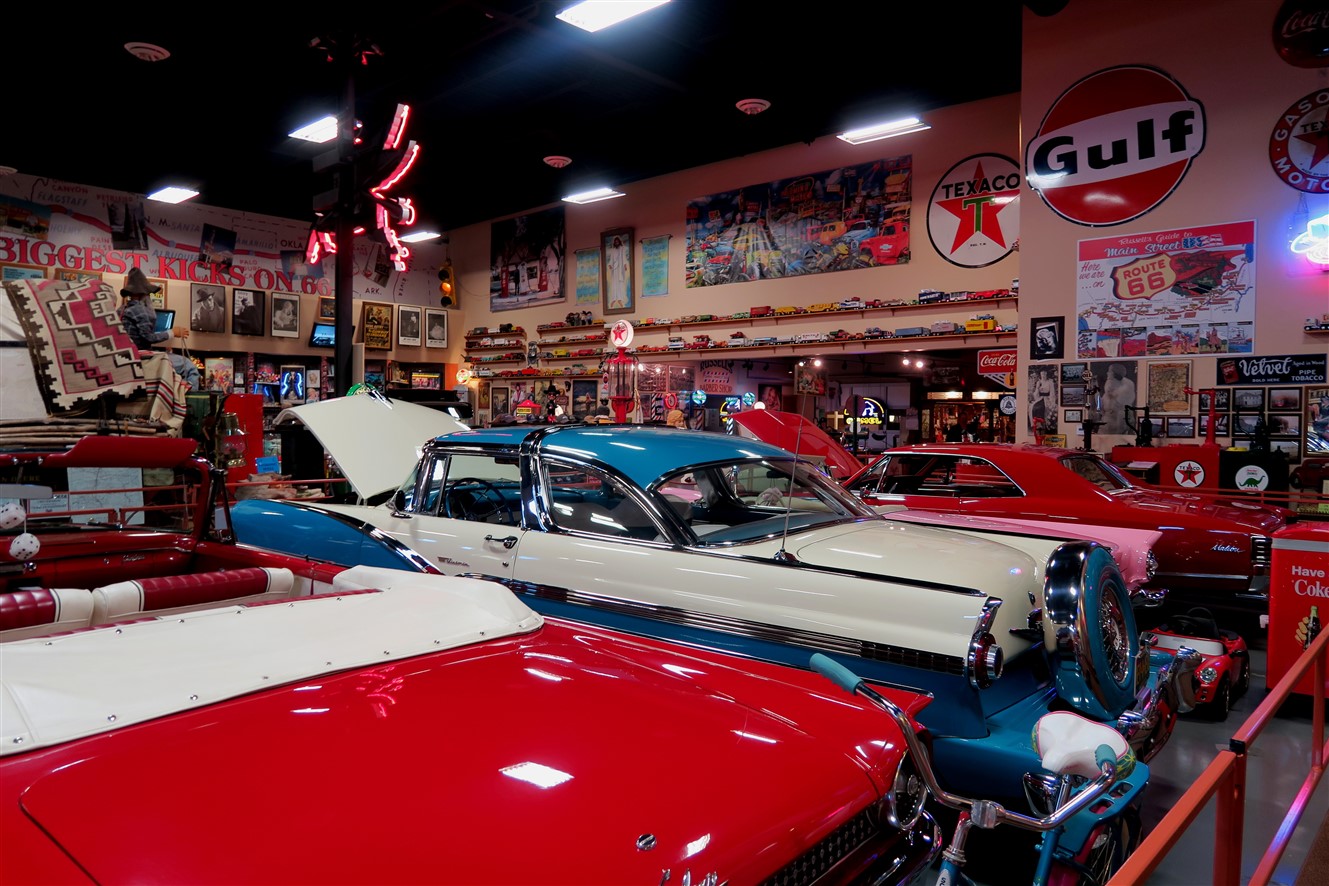 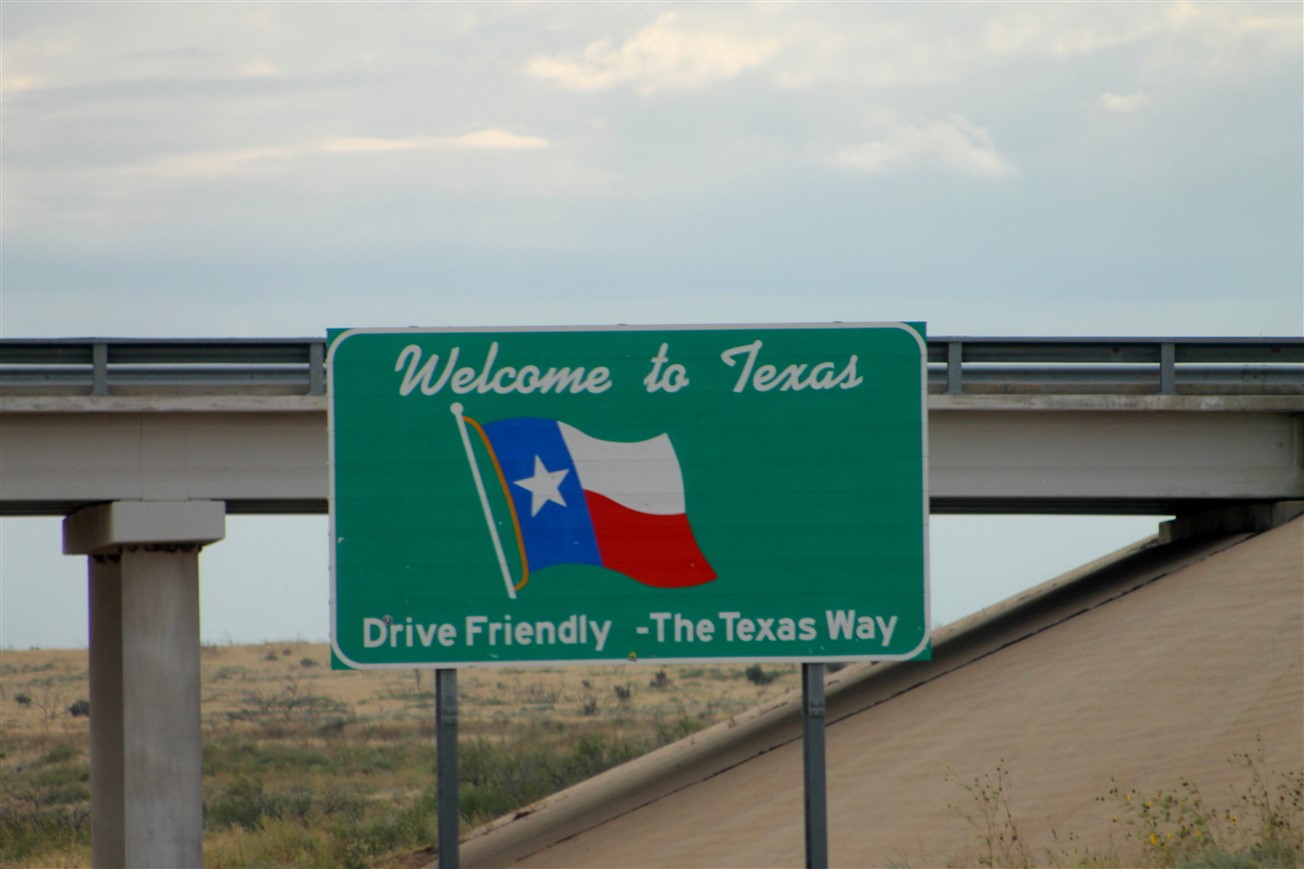 Next stop was Adrian, Texas, who has the appeal of being the midpoint of Route 66 from Chicago, Illinois to Los Angeles, California. It is exactly 1139 miles to each end of Route 66. The town had a few buildings, and a cafe. A historical marker noted the midway point while the exact midway point is also painted on the road.

After a quick couple of photos, it was back onto I-40 headed to Amarillo, Texas for what I expected to be a highlight of a lap around America tour, Cadillac Ranch. It is raining as we drive down the freeway and we can see the back ends of the Cadillacs sticking out of the ground.

Parking behind other tourists making the trip through the mud to get a close up look at the Cadillacs, I schlepped through the mud to walk back to the cars. The Cadillacs were thick with inches of paint over every inch of surface inside and out of the cars. People who have visited from all over the world left their mark on these cars by spray painting bright colored graffiti and attaching items.

It was amusing as we watched other tourist trying to remove shoes caked in mud. The mud was so thick on their shoes that they had trouble walking. I foruntately had put on my ‘mudders’, so after a quick shoe change we were off again on I-40. 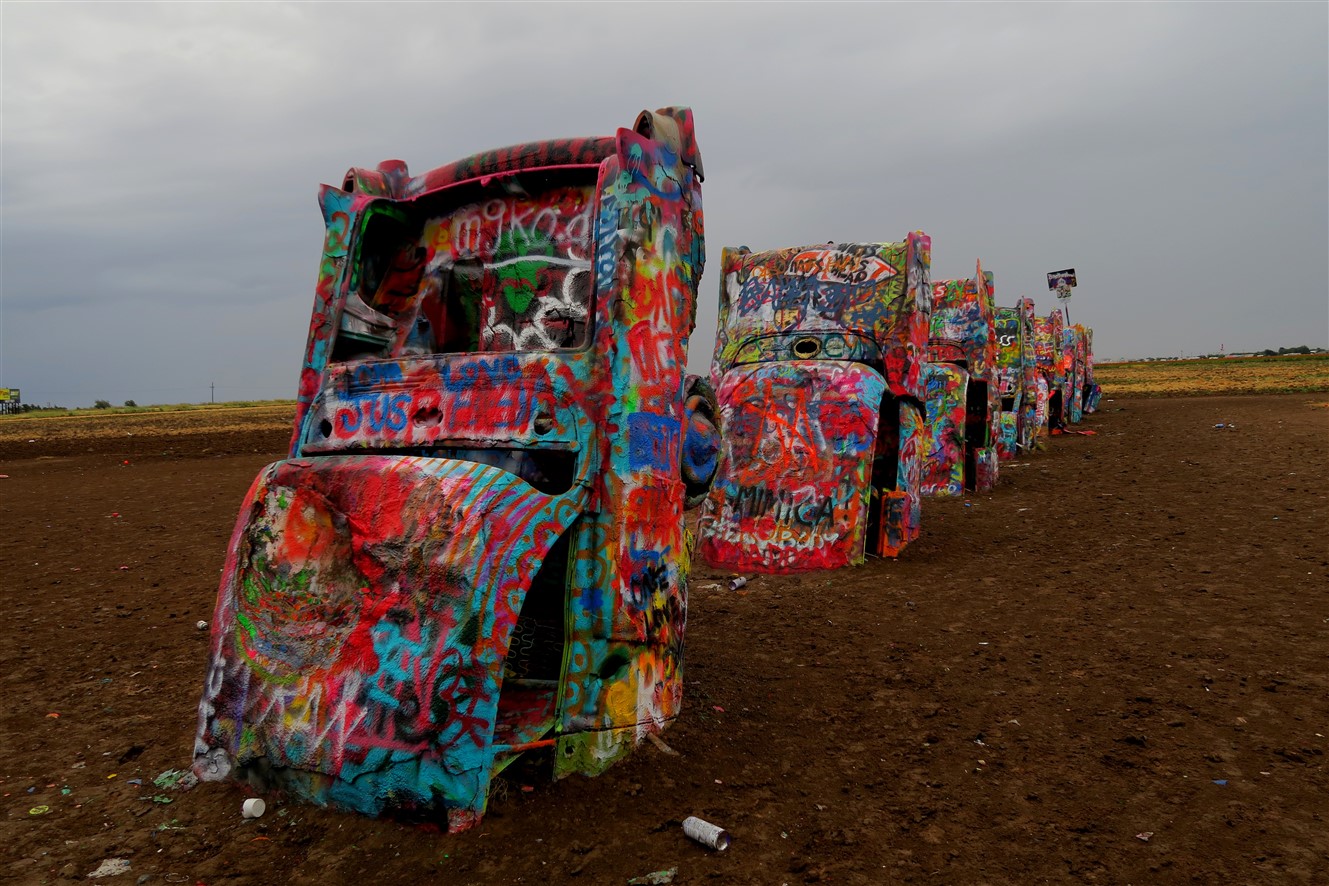 On the south side of Amarillo, Texas is an RV museum, which is actually a personal collection at Jack Sizemore’s RV Traveland. The Sizemore’s began restoring and collecting unusual vintage RV’s over 25 years ago. They built a museum that houses many of the RV’s in their collection. 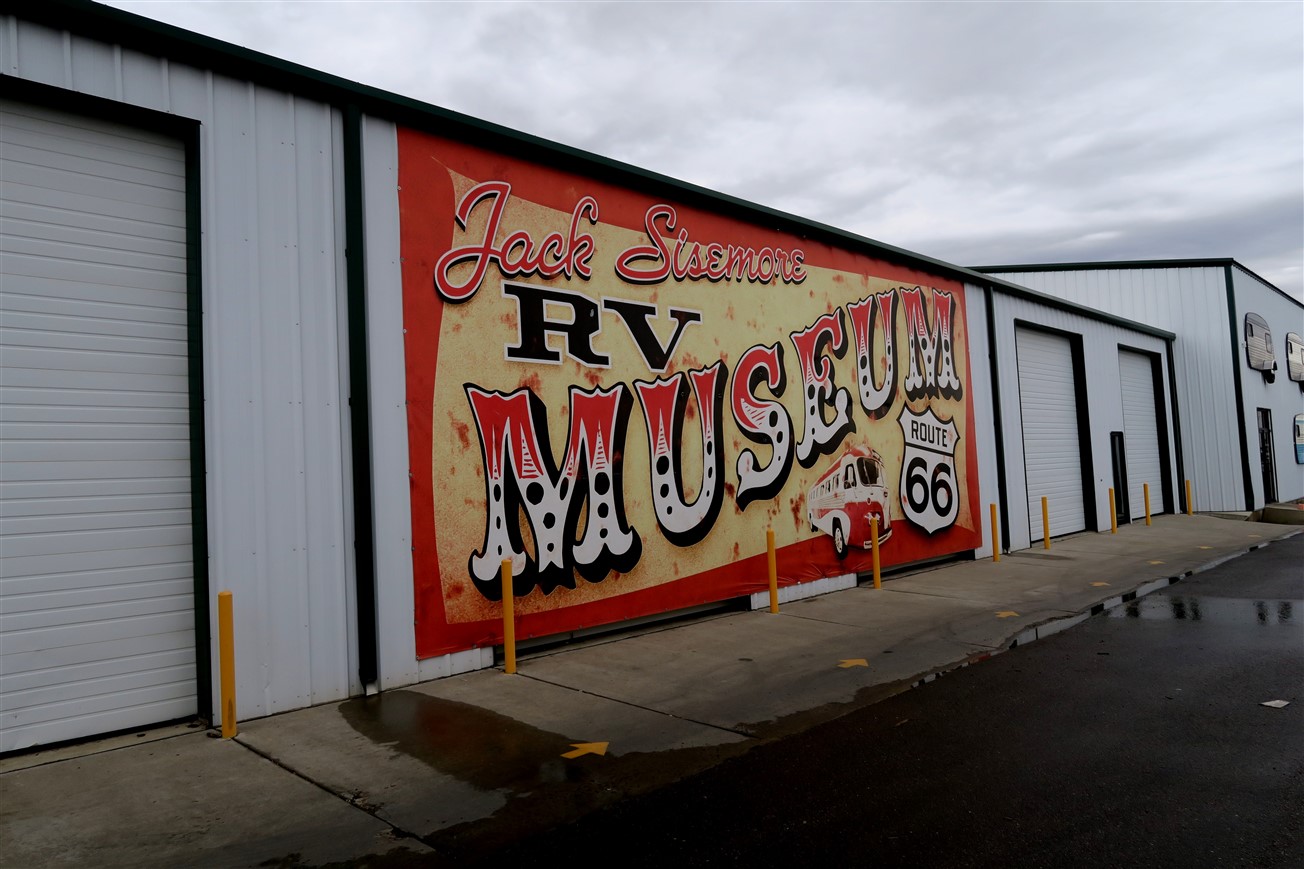 These include the Flexible Bus from the Movie RV and the first Itasca motor home ever built. The museum also had a great display of motorcycles that sat upon shelves on the wall, camping items, and 50’s and 70’s memorabilia strewn about relating to different campers and RV’s through the decades. All were open, so we wandered in and out of them for about an hour, including the retro RV driven by the Gornick’s in the movie. 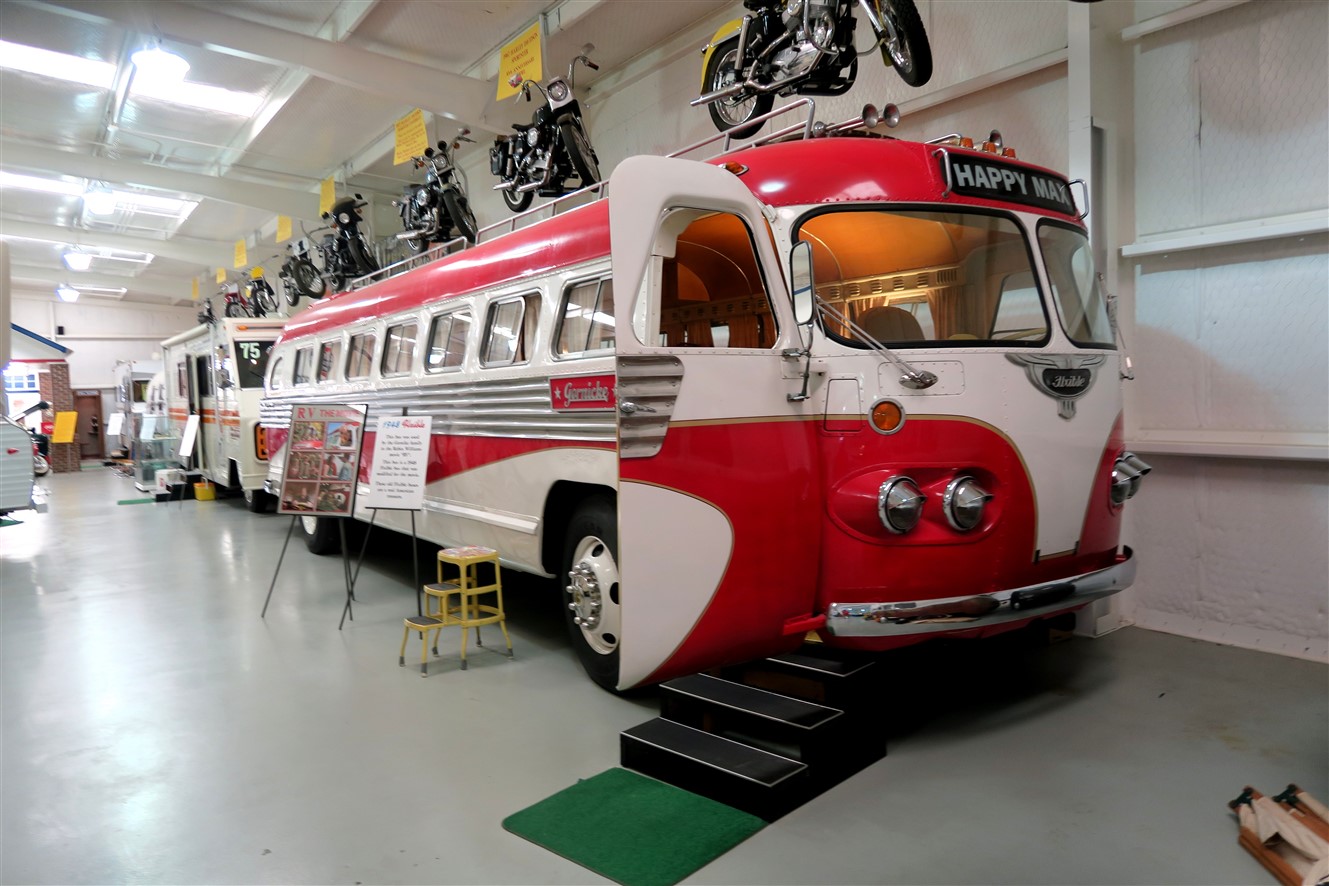 We signed the guest book and pinned our town of Columbus, Ohio on the map at the exit. Two world maps were posted since so many people have come to see the museum and marked their homeland with a pin. Europe and the USA were jammed with pins but other countries around the world were pinned also.

We arrived at Oklahoma City about late afternoon, and after checking into the Holiday Express in the old Bricktown section. As we walked through the city, we found the Chickasaw Brickyard Stadium, home for the Oklahoma AAA baseball team. It is a minor league team for the L A Dodgers. We sneaked a peek at batting practice before we were asked to leave.

After dinner at the Bourbon Street Restaurant for dinner, we continued to tour downtown Oklahoma City.

At the edge of downtown is the Oklahoma City National Memorial dedicated to the 168 killed in the 1995 bombing of the Alfred P. Murrah Federal Building and their families. Two gates tower at each end of the reflective pool. One gate marks the time one minute before the bombing and the other gate marks the time one minute after the bombing. The later time stands for the start of healing.

A museum detailing the disaster stands on one side of the pool and black metal chairs placed in rows upon the lawn line the opposite side of the pool. The nine rows of chairs represent the nine floors of the building and each chair is the position of the floor for each victim.

The large chairs embody each adult victim and the small chairs symbolize each child victim within the building’s daycare who died. Five separate chairs signify those victims who perished outside the building at the time of the bombing.

As the sun set through the opening of the west gate, lights illuminated the chairs. Though the scene was a perfect photographic moment, the memorial posed a somber reflection for all. 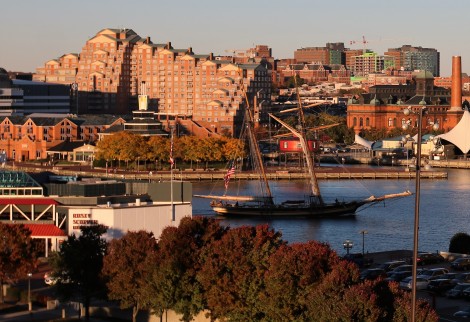