I have had the opportunity to travel many places outside of the United States. When I speak with people in foreign countries and ask if they have ever been in the United States, those that answer yes usually have been to two places – New York City and Florida.

Florida is another state I have been to only a few times, and then mostly for Spring Training baseball. This posting will once again depend on the internet for additional photos.

Since the late 1800s Florida has been the east coast place to go to escape winter. Our virtual tour starts with the 1948 map.

Florida has had population growth that rivals the western states. In 1948 there were about 2.5 million people living in the state; today there are about 22 million, making it the 3rd most populated state.

The cover of the 1948 map is showing the Overseas Highway – U.S. Route 1. This road travels 113 miles from the southern tip of the Florida peninsula to Key West.

Originally a railroad route, it was partially destroyed in a 1935 hurricane. When the Florida East Coast Railway was unable to afford to rebuild, they sold the bridges and roadbed to the state of Florida, where it was eventually rebuilt as a highway.

This photo from the South Florida Sentinel newspaper gives a good aerial view of one section of the road. The backside of the 1948 map has a cartoon map featuring many of the attractions of the state. While there has been tremendous growth, many of these features are still there.

The 1954 edition shows a beach scene, most likely from the Miami Beach area. By the 1950s the Art Deco area was thought of as old, and new ‘modern’ development was taking over.

This photo shows the main street in Miami Beach, Collins Avenue, in 1954 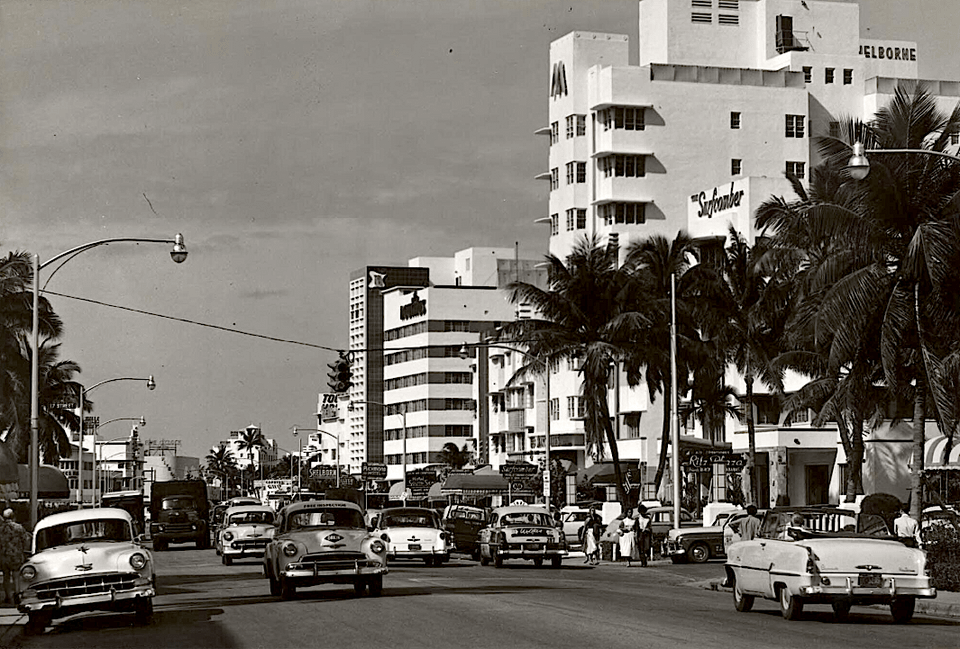 1963 – A creative approach, the beach has been formed in the shape of the state.

Our 1963 additional photo is from the Castaways Bar in Miami Beach – corutesy of Pintrest. 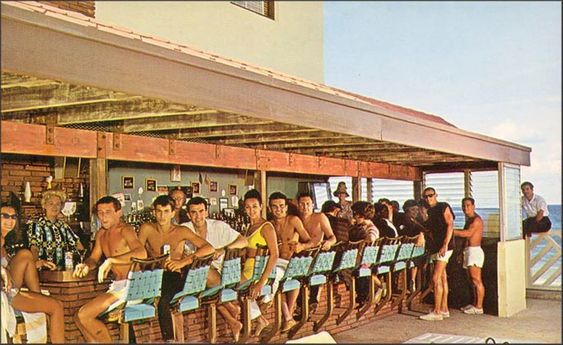 Most of the 1970s were generic, unidentified scenes.

For the American Bicentennial in 1976 Florida looks back at the nearly 400 years since the Spanish first landed in what became the state.

The Spanish arrived in 1513 when Ponce de Leon landed near St Augustine. He named the area la Florida in honor of Spain’s Easter time celebration Pascua florida (feast of the flowers).

St Augustine is proud of the fact they are the oldest continuously inhabited (European descent) city in the Western Hemisphere, having been established in 1565.

The nondescript maps continued through the rest of the 1970s.

1983 – Cape Canaveral has always been the home of manned space flight launches, so when the Space Shuttle program started in 1981, it was natural that they launched from here as well.

1985 – Cape Florida Lighthouse at Key Biscayne in Miami. This lighthouse was originally built in 1825.

1991 – The Sunshine Skyway. This bridge crosses lower Tampa Bay, spanning a distance of over 4 miles. The towers rise over 400 feet above the water level, with the road deck being 180′ high.

The original bridge was built in 1954 as a two lane bridge. In 1969 an additional span was added. In 1980 a freighter hit the bridge, causing a collapse that killed 35 people as their cars and a bus plunged into the bay. Afterward they decided to replace both spans with the new bridge. Note the large barriers in the water to prevent this from happening again.

In the early 2000s Florida sold out totally and included advertising on the cover of their maps as each one had a happy family at Universal Studios.

Universal Studios in Florida  was designed from the start to be both a working studio and an amusement park. Today it is the 6th most visited park in the United States (the 5 ahead of it are all Disney parks). 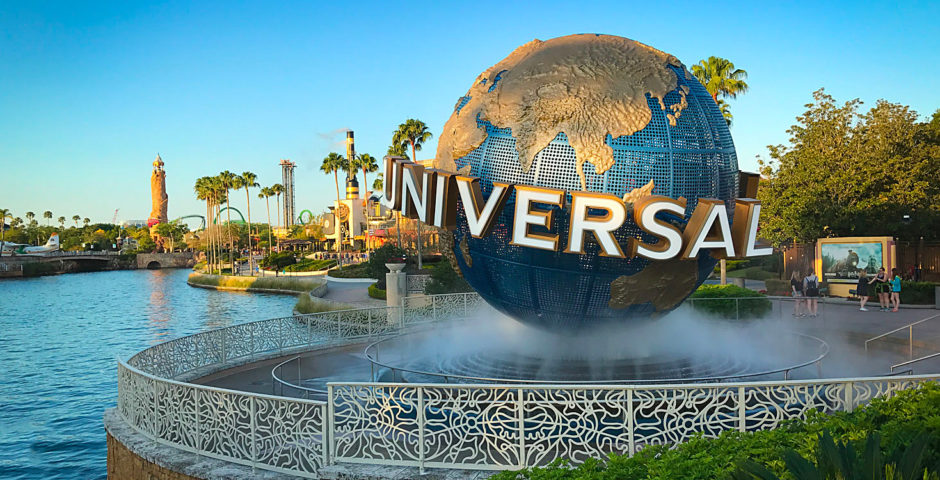 2006 – Finally some love for northern Florida. This view of Jacksonville shows the John Alsop Bridge and the Wells Fargo Center.

Since 2010 all Florida maps have the happy families at the beach. This has been their meal ticket for 150 years, and will continue to be forever.

All these maps and not one mention of Spring Training baseball. While there are still a number of teams training in Florida, the ones below have been lost to Arizona.

Among those still there